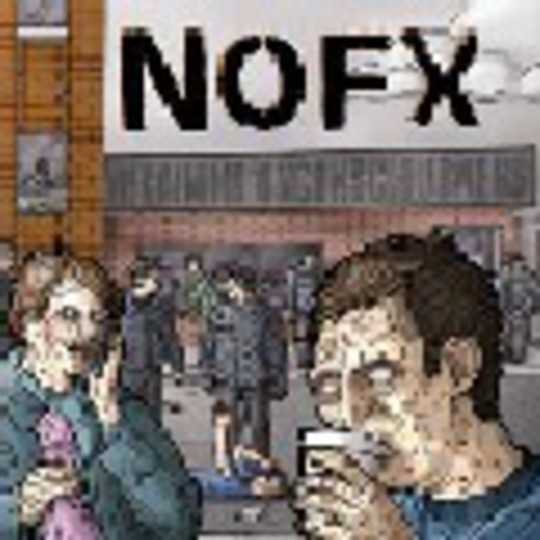 With the world’s eye’s glued to their TV screens at a time when world politics have transgressed into a fearfully ambivalent topic for many people around the world, it seems many eyes in the punk rock _world are on NOFX, and particularly their forthcoming **‘War on Errorism’ **_album, for a thoughtful, and witty, outlook on what’s really going on in the president’s head.

This 4-track EP is a sneaky taster of what’s to come on the album but first impressions suggest it to be more concerned with the increasingly bland nature of MTV-style bands parading as pop-punk in the song ‘Medio-core’. While such a song is all well & good, and pretty much expected, it does seem a tad strange, and a rather daring move coming from a band fronted by Fat Wreck Chords *boss Fat Mike, whose label is home to a number of uninspiring, similar sounding acts (Diesel Boy, No Use For A Name *etc…). Definitely one to rile all the NOFX haters anyway!

‘Idiots Are Taking Over’, however, appears to get back on the political track, and while not referring particularly to the current situation it’s still an ultra-fast hard-hitting slab of NOFX-y harmonies with some of Eric Melvin’s new-found backing shouts that do mark a slight progression from ‘Pump Up The Valium’. It's a case of Dèja-vu with third track ‘Franco Un-American’ _ **which has more than a passing similarity with that song from **‘So Long…’_ with the chorus _“Nothing seems much fun anymore to me” _(sorry, I’ve just spent half an hour looking for that album so I could name the song’!) while lyrically questioning the patriotism of the American public.

_‘Hardcore 84’ _is the only track unavailable on the full length and, as the title suggests, is a balls-out, gob-in-your-face blast of '84-era hardcore-punk with suitable backing chants and unsuitable, but still welcoming, NOFX guitar melodies.

Something pretty cool with this is at the end where El Hefe talks you through some of the choons to expect on ‘War on Errorism’ in his usual piss-take manner. However, on the strength of this release it doesn't look to be something too appetising. The end of the road for NOFX? We'll see!