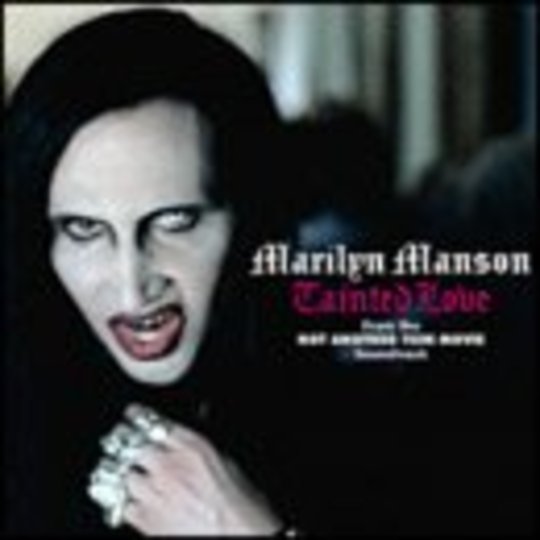 Marilyn Manson always worked best as an agent-provocateur to the more uptight members of AmeriKKKas religious right. For some reason his really rather silly Oogie-Boogie, Halowe’en drag act annoyed them, so for that reason alone it was worth him sticking around.

For the rest of us, however, who are used to seeing photos of the Queen Mother in the papers every other day and were therefore immune to any of the shock factor he thought his ‘look‘ might have, we were left with the music.

Unfortunately the music, up till now, has been a rather timid hotchpotch of sub-Cramps style sleaze, Alien Sex Fiend’s Hammer Horror swamp-glam stomp and Nine Inch Nails industro-rock shorn of all of it’s epileptic sonic maelstrom.

Now there’s this, a cover of the already over-played and over-familiar Soft Cell version of Gloria Jones’ classic, northern soul shuffler. What’s remarkable, though, is that Manson’s take on it is the flattest, tinniest, thinnest version yet, utterly devoid of either of the other version’s fraught emotion and sense of melodrama, in fact, it sounds like a ’will this do?’, reluctantly knocked up in a studio in half an hour job. It is for the soundtrack to some film, so it could be a put-up job, but that’s no excuse for the laziness of choice and execution on display here. It‘s no better than Guh-Guh-Granville - sorry - Gareth Gates and his poxy, naffin‘ Righteous Bros cover.

A friend says she thinks his voice sounds like the Mick Jagger impression on Stella Street, but if only Manson had half of that campness, then maybe he could pull this off. I mean, Marc Almond could get away with the line “I’m gonna pack my things and go“ because he could imbue it with all the right amount of hurt flouncyness. Manson, for all his “yes, that’s right, I’m wearing a dress. DOES THAT SHOCK YOU?” posturing, simply can’t.

A Goff poster-boy he may still be, but, in this age where dispossessed, boiler-suited, middle Americans like Eminem and Slipknot take centre stage Marilyn Manson’s hackneyed Rocky Horror / Addams Family shtick has long since worn thin and his role as the Republican Party’s devil incarnate has been usurped and his Official Corrupter of the Youth crown has been stolen.

And with weedy, chart-friendly pap like this, it looks like he ain’t ever gonna get it back, neither.

Alive To Every Smile