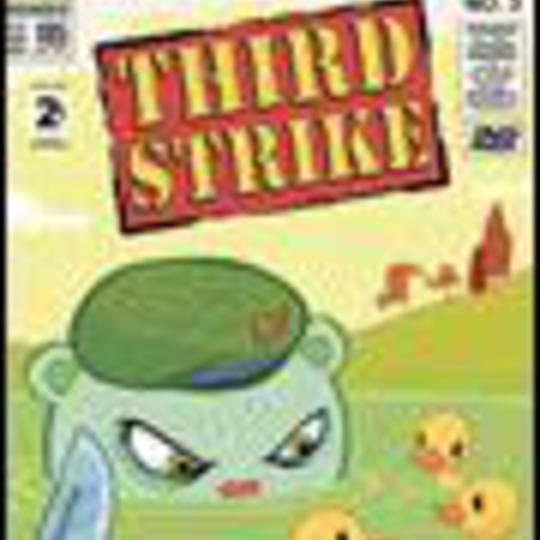 Secondary school taught me one valuable lesson: mindless violence rarely solves anything. “Fight, fight!” we’d hear come the lunchtime bell, and rush to the bottom of the field to find nothing more than two third years, shirts open, wrestling each other in a bizarrely homoerotic fashion. “Come on! Slug him!” we’d shout – not in unison, mind, but we all thought the same way – before Mr Jones would wander over and break it all up with nothing but a stare. That guy scared the shit out of me. Truth be told, he still does.

Anyway, my point: if those boys had been cute and cuddly cartoon characters possessing an array of sharp stabbing implements, blunt bludgeoning weapons and a healthy dose of simple bad luck, lunchtime battlegrounds would have served up buckets more blood and guts. This DVD – the third instalment, hence that catchy title – features 16 short animations in all, each of which contains more of the red stuff than an entire Manga fan’s video collection.

A dim-witted blue moose, Lumpy, traps a leg under a felled tree. Panicking, he proceeds to slice through the pinned limb with whatever’s to hand – a spoon, in this case. Blood spilled, bone cracked (the sound effects throughout are awfully good), sweat spent, our hero looks at his handiwork only to see that – SHOCK – he’s butchered the wrong leg. Oh, the humanity… well, the mooseanity.

In another episode, a daddy chipmunk (possibly – it’s kind of hard to tell) takes his child to the beach. Offspring is buried in the sand whilst daddy fetches an ice cream. Cute, eh? Until the tide comes in, yes. What follows, anything but cute.

And so it goes – five-minute flick after five-minute flick provide enough gross-out moments to last a lifetime. Buddhist Monkey – a bonus character here – stars in the standout episode, but there are (sick) laughs to be had every minute.

And the lesson learned here? Never let the Teletubbies get their paws inside the kitchen drawer. The crimson-coloured fallout is unimaginably horrific. That, and that mindless violence may not solve much, but an anteater experiencing an Alien-style chestbursting is funny as f*ck.