Tell Me What Rockers To Swallow DVD 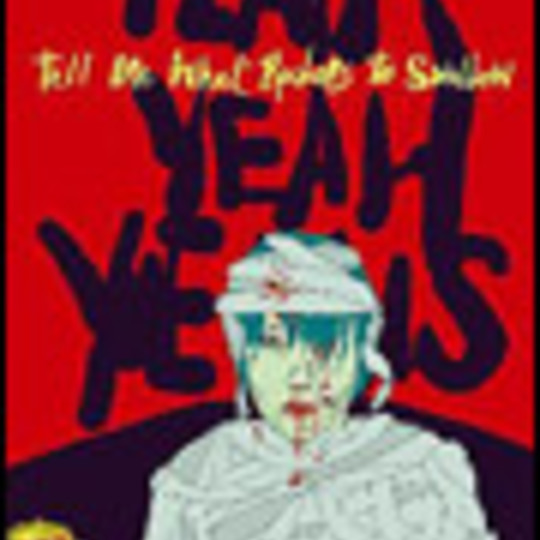 Basically a cobbling together of* Yeah Yeah Yeahs* exploits to date, 'Tell Me What Rockers To Swallow' packs the hits and misses - all of them - into a breathless live performance, captured expertly at the Fillmore in LA. Added value comes in the shape of a documentary, of sorts, and a quartet of videos. Good thing too, as whilst YYYs shows are notoriously wild affairs, certain essentials - simple atmosphere for one - are lost in the translation from in-the-flesh to 14" portable. The lengthy set list, featuring a handful of previously unheard (by these ears, at least) songs, will please fan old and new - not that there's a whole lot of difference there - with tracks like 'Miles Away' and the still-got-it 'Machine' rubbing shoulders with newer material. Indeed, such is the nature of YYYs songs - deceptively simple but utterly addicitive - that the old merges seamlessly with the new.

The live performance's only problem is that it's simply too long - even those with the patience of a saint will be hard pushed not to skip to favoured tracks. It's best to break it up a little by flicking over to the videos, the best (and most recent) of which, for 'Y Control', must've had MTV in a right state. What's this, children hacking limbs off with axes? Yep. Kids run riot while Karen O prances about like a maniac. It's truly surreal.

A 20-odd-minute documentary, filmed by O beau (so I'm told) Spike Jonze, fleshes out the gig, with Jonze forcing his camera into the faces of the crowd. They're captured on the street, in the queue, in the venue, on the front row, and finally in the sweaty aftermath. Few subjects are reluctant to be caught on camera, although Jonze receives the cold shoulder from a couple of 'get that out of my face' girls. Of course, they all want to be Karen O. Backstage and tour footage from Japan (fairly uninteresting) and an award show performance of 'Maps' (by far their best song) finish off a DVD that, for the right money, would warrant purchase by even the fairweather YYYs fan, if only for the sick 'Y Control' vid alone. Watch it through your fingers.