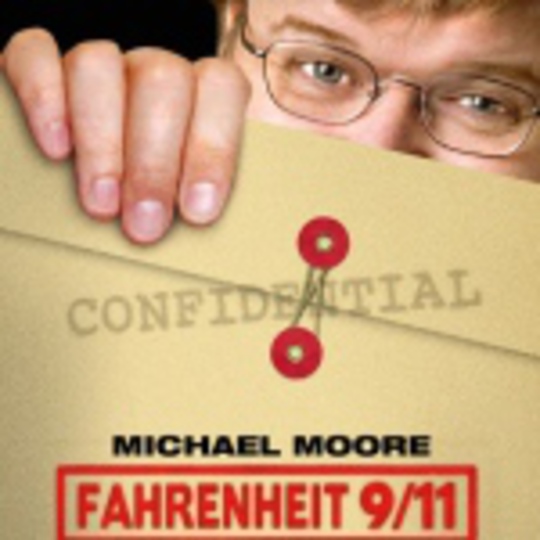 As I write this, the BBC news is reporting that the Bush administration have warned the threat of terrorism may force them to find a legal way to delay the US Presidential elections. Nothing to do with desperation then. The juggernaut people-power success in the States of Michael Moore's documentary, Fahrenheit 9/11 must be truly terrifying if you're one of those oily scrotes currently running America. Despite your best efforts to suppress and slander the movie, freedom of speech (well, freedom to go to the pictures) has prevailed. $60 million at the US box office in three weeks and sold-out cinemas across Republican heartlands like Texas are a foghorn wake up call.

In fact F9/11 is a fairly conventional documentary, though stylishly compiled and injected with Moore's sense of the hip and the darkly comic. There are far fewer silly stunts than Bowling For Columbine and even Moore's narration seems quieter and angled downbeat. Also there's a linear narrative this time. Focus is sharper - obviously - because the target is specific. George Bush is the playboy fool. No words needed when you watch him mugging like Benny Hill at the camera, moments before announcing he's taken the US into war. Those around him, propping him up, his family, are shifty, money-drenched whores to the oil industry and the Carlyle Group. Some of the pandering to Saudi money is horrifying.

The mainstream US media, always in the pocket of the super-rich, have called this 'propaganda', as if every wardancing Fox News bulletin over the last eighteen months was pure objectivity. That these Ugly Rightists, in their smuggery, are subjecting this openly polemicising filmmaker to tougher scrutiny than their own government is embarrassing. Luckily, there's not a single duff fact in this movie - it's been meticulously checked and double-checked.

And it's enough, whatever you believe, to see - for the first time - American soldiers who've lost limbs during the occupation of Iraq, questioning why they were sent there. It's a patriotic, brave and moving segment that gives us possibly the most honest portrayal of bored and scared smalltown kids trying to police a hostile desert I've seen anywhere in the media.

Michael Moore was always going to follow Bowling For Columbine with something truly special. But it's a testament to his sincerity of purpose that Moore suppressed the showman's ego and removed most of himself and his kooky humour from the mix, presented instead a film built largely from saved footage and interviews.

If the Democrats can pull themselves together enough to take advantage of this powerful head start, we may well see the back of the awful Bush. And if so, Michael Moore will have made a real contribution. Please go and see Fahrenheit 9/11 and take a good look at the man Blair still follows to the ends of the earth.

First Of The Gang To Die