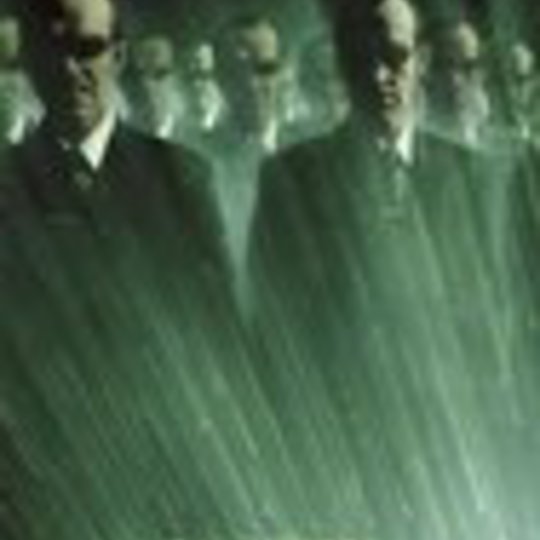 Ah, where did it all go wrong?

And fair’s fair, Reloaded weren’t no Unbreakable or nowt. OK it had that fuckin horrible bit where Morphine was like embarrassing ‘imself by giving this “we will fight on the beaches” speech thingummy with his belly hanging out (err… “costume…!!!!”) and all that weak catch all ‘philosophical’ crap about all the ghosts and vampires and that being viruses. And the script was cack. But it wasn’t dick. Cos there was the motorway stuff and the cool baddies and and… y’know.

But this one is. It’s dick. It’s fucking arse. It’s less good than a paedophilic vicar trapped in a playpen on conscience-blockers. OK so let’s start with what isn’t shit about Revolutions. Oh, wait… there are no redeeming features. The script was clearly written by a fuckin six year old with learning difficulties, there are no good fight scenes, the acting is abysmal, the CG is poor and all the action happens in the fuckin dark. I mean what’s the point?

The (bleeuhhh!) love stories are so uninvolving it’s like watching Pearl Harbour on E. People die. NO ONE CARES. But they have to drag it all out into all these ‘meaningful’ fuckin speeches about how love is eternal and how “I believe in the one” and all that. So instead of being unmoving it’s actually really fuckin annoying.

Everything that happens is soooo predictable. Y’know that irritating kid out of the second one that follows Keanu around? Well guess what, he does something really important, just like they said ‘e would. Genius. Oh and they spend about twenty minutes making up this bollocks explanation for why the Oracle isn’t the same bloody actor as the last one. All they needed to say was the other one read the fuckin script and dropped dead rather than be involved.

To top it all off, they don’t even bother explaining what the fuck’s going on. None of the story lines are resolved and they don’t even try to come up with a reason why Neo can blow shit up just by thinking about it in the ‘real’ world.

I know you’ll all go and see this whatever I fuckin say, but don’t say I didn’t tell you it was gonna be whack. Got it?