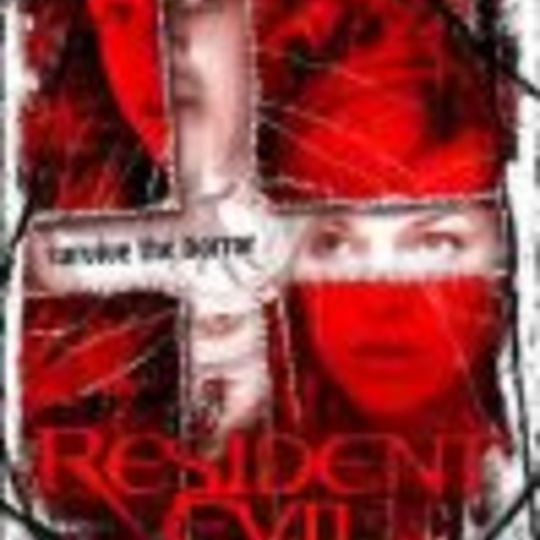 Movies from video games are never good idea, are they?**.

I mean, look at the Super Mario Brothers movie ? Mortal Kombat? Well, director Paul W.S. Anderson seems to be a on a video game sci-fi / horror trip lately, having directed the self-same Mortal Kombat in 1995, as well as such high budget, low concept genre B movies such as amityville-horror-in-space non-Event Horizon and the criminally underrated Soldier,a movie deemed so bad it didn’t even recover Kurt Russell’s fee for the movie, let alone get released to the cinema’s in this country.

And from such lumini,comes the film of the game of Resident Evil, and if you know the game, then the plots simple enough. Zombies + marines = Slaughter fest. Well, there’s a bit more to it than that (mulitnational corporations are evil ! CLANG! genetic experimentation is bad! CLANG!), but to recap, an secret-underground-city-come-research-laboratory called “The Hive” becomes contaminated by the escape of a genetic agent, and the entire population become re-animated as the brain eating undead, then the marines go in to save the day. And then, try to save themselves, if they can. If they don’t, the rest of the world becomes zombiefied, so like, no pressure,OK? Yer typical 1st person ‘instant camera’ (ie point and shoot) shoot-em-up then really. We ain’t talking Godfather territory here, alright?

All in all, The director and screenwriter is well suited to the generally flimsy background. Characters are brought in, and killed off before you can even know who they are or care. However, the visual design and production values are top notch – perfectly evocative of a underground city turned wasteland, and with some innovative weaponry to boot. The “Red Queen” assualt features a fantastic slice n’ dice sequence(though cut too soon to be fully effective…). The rest of the film though, plays like a cross between the recent Rollerball remake and Aliens; fun, but dumb, soundtracked by ridiculously loud nu-metal. Thank heavens for a very creepy very effective score by Marilyn Manson then. However, any creepiness that the film imbues is soon underwhelemd and undermined by zombies that are as unconvincing as possible, and the final subpar CGI end-of-level boss kinda thingy at the end of the movie quite simply looks like its been transplanted straight from the original game…crappy low-res graphics intact.

The choice of virtual unknowns means its difficult to guess who’s gonna live and who’s gonna die. Sometimes its difficult to care but there again, Milla Jovovich(who seems to have a gratuitous nude scene in every sci-fi film, and here’s no exception) ain’t gonna die, coz there’s always the sequel that’s set up neatly at the end.

It’s a B-movie where the only ‘brains’ are a weird, spooky kooky chant coming from the zombies intent of killing the living. It’s a throwback to the good old zombie movies of past, only with piss-poor make-up and subpar effects, but shedloads of hyperviolence and explosions and unfortunately, very, very little gore.. With a $40 million plus budget, it’s pure schlock- gunplay + zombies fun. Leave your brain behind, forget about the never ending bullets (quite exactly how does Milla Jovovich get 17 shots out a browning .45 pistol without reloading?) and lets go a Zombie-killin’.... After all, there's always more games to buy and sequels to be made.....