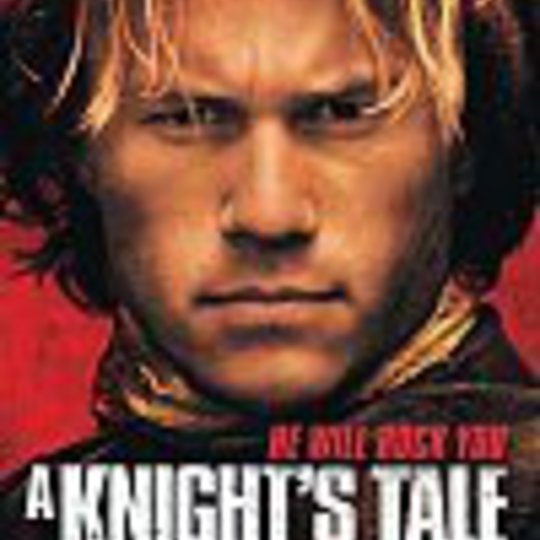 When his master dies, William Thatcher (Ledger) decides to take his place in the jousting arenas of France, earning cash galore in the process. With the help of a gang including Roland (Addy), and with Geoffrey Chaucer (Bettany) to spin a few yarns, the gang take tournaments by storm. But how long can the lie last before someone discovers Thatcher's true peasant identity? credits, it is apparent 'A Knight's Tale' is intended to be a tongue in cheek, entertaining film from LA Confidential screen writer Helgeland. And that suits just fine. Bearing that in mind, it is quite easy to slip away in the medieval scenery, and accept the full-on 70's style disco dancing of a banquet scene. Historical accuracy was evidently set aside in favour of entertainment, and taking the film on the level it was intended easily avoids any discomfort at this fact.

Although Helgeland may not repeat his last success at the Oscars with his actors, it doesn't seem to matter.The performances fit in with the feel-good factor that the film creates, with the natural warmth and comic charm of Ledger and Addy coming across well. Paul Bettany easily gives the best performance as Chaucer. The character makes a memorable entrance, and is set aside from the rest with a touch of grace, which Bettany looks entirely comfortable with. All in all, the majority of the actors come from entertainment roles (Ledger from '10 Things...' and Addy from 'The Full Monty'), and this appears to buoy the film at it's level well, and fits it together nicely.

Definitely a film to see when wishing to see something at face value. Don't take it too seriously, and it'll leave a warm fuzzy feeling inside. At the end of the day, all that 'A Knight's Tale' is missing, is the blind man re-gaining his sight.