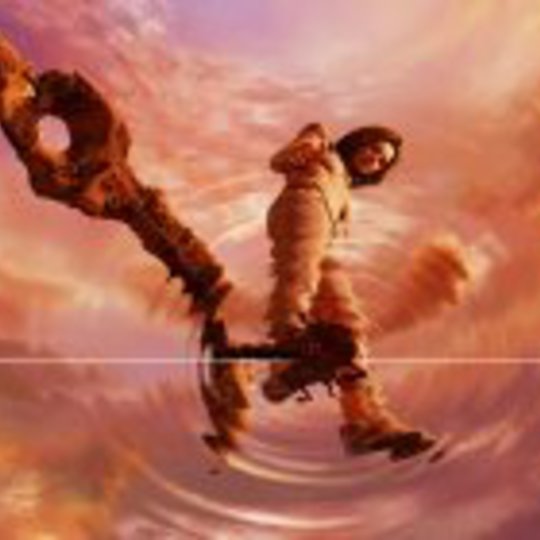 There are films that people will look back at the future as landmarks of cinematic history. Gone with the Wind, Ghandi, Titanic, Toy Story, Star Wars. Add Final Fantasy to that list. Because, Final fantasy is simply a technical marvel, visually stunning and a masterpiece of achievement.

Such people who make lists forget "Young Sherlock Holmes", which featured the first completely CGI character, in the Stained Glass Knight. When Toy Story came out in 1995, people marvelled at the realism of the computer animation. FINAL FANTASY is the next such landmark in Computer Generated cinema. Quite simply, this film , though taking the name form the hugely popular Japanese computer game series of the same name – is completely unrelated in plot to the games, and taken as a stand alone film, is a hugely superior piece of sci-fi; everything Titan A.E. wanted to be, but wasn’t. And far superior to that disastrous flop. The visual side of the film is simply stunning beyond belief: With a visual scope beyond what Lucas imagined for Episode I and far far more believable, there’s times (frequently) when you forget that everything you are seeing is computer generated – much like a great many of the effects shots in Pearl Harbor. Following some basic plot Mcguffin about the earth being attacks by “Phantoms” – beings who arrived in Earth in a meteorite and having desolated the majority of the planet, the survivors either live within protective domes or in space, working on research to defeat the enemy, warring factions amongst the survivors emerge, one favouring sheer force, one not. Enlisting the help of an army unit, Dr. Aki (Ming Na) leads an attempt to thwart the plans of the militaristic General Hein while trying to save the planet by any means necessary, short of all out war. and their translucent quality is truly etheral. The vistas and locations- a ruined New York city, the Tucson desert, plains full of advancing alien warriors (far far superior to The Mummy Returns), space stations and futuristic cites being overrun by Phantoms – are far beyond that of any sci-fi click, and some of the CGI space work (such as the space stations and ships) look more realistic than say, effects done with real models in the past.

However, plot wise, this seems to be based on contrivance and coincidence rather than much else, and with paradoxes abounding, this film truly shows it’s anime origins. Not since, say AKIRA, has an anime-based film been so awaited by a more mainstream audience. On the basis of this, the visual art form is at its finest – I just wish the same amount of time had been spent making a better script and less clunkenly leaden dialogue as on the effects. But ultimately, it’s a hollow, poorly scripted though visually sumptuous film. Its not brain candy- but it eye candy. And unfortunately, little more than that.