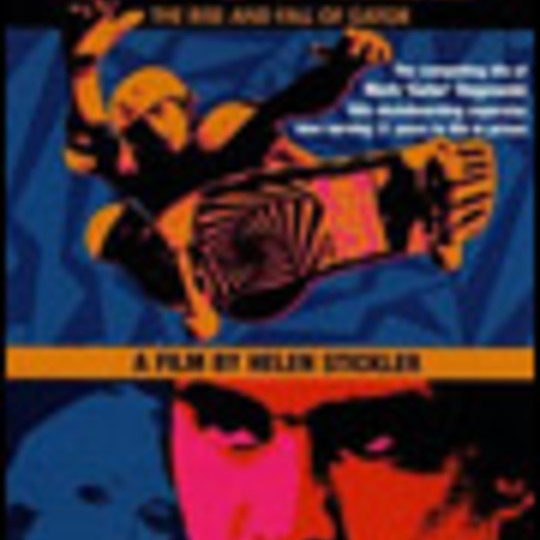 I don’t skate. I can’t, frankly – put me on one of those four-wheeled planks and I’ll hit the dirt quicker than OAPs apply denture adhesive at a rock cake bake-off. So, at face value Stoked seemed of little interest. The story of one skater’s decent from the lifestyle of a king to a lifetime in the clink, Stoked had critics on the other side of the pond applauding director Helen Stickler’s skill and attention to detail. Thing is, most of those critics had at least some idea of who said skater, one Mark ‘Gator’ Rogowski (later ‘Gator’ Mark Anthony), actually was. Me? Not a clue.

Stickler’s attention to detail does see to that, though. The first half of Stoked is given up entirely to Gator’s early, pre-pro and post-pro years, and also serves as a great documentation of the early years of skateboarding. Ramp skating was suddenly all the rage, and Gator found himself at the forefront of a new batch of sporting superstars. Picked up by Vision to serve as the public face of their company, Gator toured the US and beyond, accumulating wealth beyond his wildest dreams. Even if you’ve never heard of him before, 30 minutes into this documentary you’ll think of Gator as some sort of long-lost friend, an echo from a bygone era. Sure, he was obnoxious as fuck and somewhat pretentious to boot, but the guy could skate. The archive footage of skate events dating back from the early 80s proves as much.

History out of the way, Stickler suddenly shifts years. Moving towards the early 90s, she highlights how skating moved away from the somewhat exclusive skate parks and onto the streets. Gator couldn’t cope with the change, and fell into alcoholism (and promptly off a hotel roof). He was nothing of a street skater (again, archive footage showing him trying to grind a curb is simply laughable), so sought solace in booze, like so many one-time starlets of any scene, be it sporting, musical or whatever, who find their USP to be somewhat dated. He became a born-again Christian, much to the confusion of friends, his fiancée Brandi McClain, and his fellow skaters, but still his problems continued. A messy break up later, and he was alone. He was out of favour with what had become his life, and distinctly out of touch with reality. Despite recommendations to seek psychological counselling, which Gator refused as such treatment was dismissed under his new-found beliefs, he finally committed a crime that shocked all those involved in skating, and in the sporting world. Murder.

Gator is currently serving 31 years to life. Stickler’s interviews with him come over a phone line, as no face-to-face encounters are permitted in the state of California, at least not on tape. Those with friends and colleagues, including well-known skaters Tony Hawk and Steve Caballero, are done in the traditional manner. Many of them state that they feel Gator got what he deserved; others say he was something of a prick all along. Certainly Stickler’s initial portrayal of him suggests he had an inflated ego (something that has obviously subsided during his time away), and she never once paints him in a sympathetic light. This is the story of a man who was damaged goods from the outset, and ultimately went the same way as so many with excessive burdens to carry. What he did was inexcusable, a sentiment echoed by every interviewee here. Had it not been for his massive profile (so big the likes of me didn’t have a clue who he was!), little would have been made of his crime outside of the courts. Instead, Gator has become even more of a legendary figure because of it. At least Stoked doesn’t go down the ‘tortured genius’ line, or anything similar – Stickler presents the facts, offers the opinions of those that knew the man best, and leaves it as that. It’s a near-perfect documentary, really.

Today, skateboarding is huge, bigger even than it was in Gator’s day. Part of me wonders what would happen to sales if someone like Hawk or Bam from Jackass were to go a similar way. Would the kids care? I don’t know. I don’t skate. What I do know is that Stoked is a remarkably watchable documentary, whether you’re heavily into the subject matter or not. The off-tangent asides into the world of merchandising are particularly interesting, especially considering the size of the skate business now, and the piece has a sense of completeness to it unmatched by many a similar, investigative/opinionated piece. Oh, and some of the old-school skate footage is hilarious. Really, imagine today’s stars wearing mismatched Bermuda-style shorts.

Extras here are in abundance – extra interviews, video footage of skate events, criminal case documentation, home movies… you want it, you got it. Oh, and the soundtrack’s pretty awesome too, with the likes of Black Flag and the Dead Kennedys featuring.