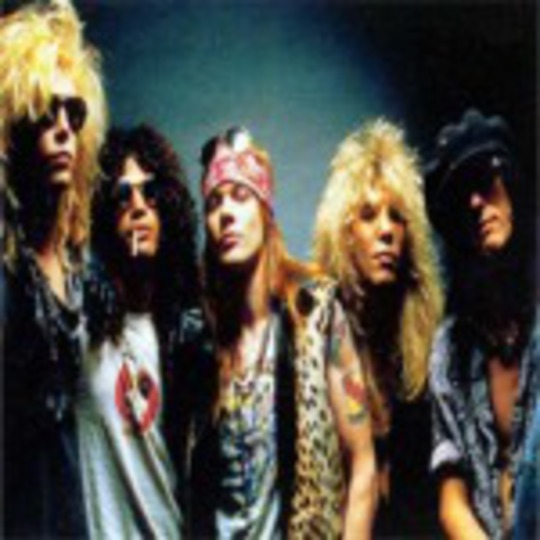 (Hello: all references to Guns N’ Roses in the following will refer to the original line up of the band, not the more recent incarnation with the singer and a KFC sponsored guitarist).

Bands often fall from grace - some in an ultra-fashionable Blaze of Glory (thanks JBJ), some quietly decide to turn down their amps, and some simply disappear without trace. Then there’s this lot.

10 years on from their final live dates, the band of Jack drinkin’, smack jabbing, small pant wearing maniacs known as Guns N’Roses raise their heads with the (re) release of three DVDs. For a band that didn’t so much disappear as just couldn’t be arsed to re-string their guitars, it is difficult not to feel a tad pissed off that the world-conquering juggernaut of Axl Rose’s bandana-soaked histrionics and Slash’s Marlboro-stained Les Paul lost momentum in such pathetic fashion.

For anyone who has ever picked up a guitar, screamed into a shower attachment or simply enjoyed the pleasure of jumping round your room like a big bouncing tit, then it is highly likely that at least once during any of these fantastic activities ‘Appetite for Destruction’ has been your chosen fuel. Tales of smack addiction ('Mr Brownstone'), prostitution ('Rocket Queen') and city urchin life ('Welcome to the Jungle') sit neatly beside other tales of smack addiction, prostitution and city urchin life - outstanding subject matter on all counts, I think you’ll agree. Not that I’m claiming an affinity with a bunch of heroin-jacking Sunset Strip-walking burnouts, but G'N'R’s debut LP has a stamp of aggressive authority and appeal rarely found in Rock n’ Roll. This seems to be the case for two clear reasons. Firstly, This band can play. All of them can play - very fucking well indeed. Adler, Stradlin and McKagan rumble along in the background, forming a rhythm section as tight as the one pair of jeans they shared between them. Slash rips through some guitar parts that (I hesitate to use the word) are truly ‘Classic’, and Axl screams his nuts off in the sort of guttural assault that can usually only be found in the belly of sick polar bear. Then there is the aforementioned behaviour. Many bands aspire to the clichéd (but admit it) sometimes mesmerizing lifestyles found in Rock n’ Roll Babylon, but few sit on its peak. This band just got it – and this transpires on the record. As together in its music as it is loose in its feel, the consistent appeal of ‘Appetite’ lies in its combination of instantly memorable songs played by raw talented musicians at the peak of their wasted eagerness. Taking a year to get to the top, but get to the top it did, sixteen years on it still sells six thousand copies a week.

The half-arsed follow up ‘GN’R Lies’, an album put out in the middle of the non-stop tour that became GN’R’s existence post 1987, was not what was expected - slow burner ‘Patience’ and early demo release ‘Move to the City’, being the only notable tunes worth mentioning. Still, their crowning yet tragically marred performances at Donnington (two fans were crushed to death in 1988), cemented the band firmly into the top echelons of Rock, and quickly into the top studio at The Record Plant for the recording of the double-fisted (sorry, couldn’t resist) double whammy that was to become ‘Use Your Illusion 1&2’. Lacking a little of ‘Appetite’s’ visceral punches, but taking hold of their new found arena sized scope (check out ‘Estranged’), the idea of releasing two separate albums on the same day can understandably be seen as just a little egotistical. Maybe so, but I was eleven so without hesitation, I immediately bought both albums. But hey, it was 1991, what else was I going to listen to, 2 Unlimited?? (Well, yes, I think I purchased ‘No Limits’ as well, but Guns N’ Roses are far more important generally, and in particular to the continuation of this blab.) I loved the ‘Use Your Illusion’ records - still do. Admittedly, now it’s more for the songs, rather than the (then fairly new) ‘Parental Advisory’ stickers and Axl’s retort of ‘Fuck you, suck my fucking dick!” in the middle of ‘Get in the Ring’, but it’s still good to hear somebody so pissed off they want to name names and beat the shit out of music journalists.

The world tour that followed, and is documented in the two part Tokyo gig found on the new Use Your Illusion DVDs, is still as enthralling to watch 10 years on – a Rock n’Roll train-wreck cavorting along at its very, very best. Then of course everything went to utter shit. ‘The Spaghetti Incident?’ (a piss-poor album of punk covers that actually sounds more at home in 2003 than it did in the early 90’s) was jumbled together and pinched out of the arse end of Geffen’s arse for no apparent reason whatsoever, then nothing. Rumours abounded, the band members recovered from years on the road (McKagan’s pancreas later burst) and regular hints of studio time being booked then squandered were rife, but still nothing. Following founding member and song writing stalwart Izzy Stradlin’s departure in the middle of the world tour, Axl’s megalomaniac ideals took over, and by 1996 the sweaty guy with the sick polar bear growl was the only one left - surrounded by endless litigation, royalty squabbles, divorces and arrests. Neil Young’s often quoted lyric on the methods of bowing out,“It’s better to burn out than fade away”, is worth re-addressing in this case. For it seems that Guns N’ Roses – one of the most exciting, dangerous and downright brilliant rock bands of the last twenty years - decided to do both. Solo projects and a single UK appearance at Leeds last year by a band using the GN’R name but actually called ‘Axl Rose decides to slip out of bed, and leave his ego to rest for an hour or two’ have done nothing to re-kindle the spirit of the original line up. Rock n’ Roll bands come and go. Some you wish would immediately go away (Goodbye Jet - I changed my mind), others you might get sick of after the first album (The Darkness?? - we’ll have to wait and see) and some bugger off before you can even afford to see them live (Guns n’ Roses!). Should we want more? Or is it best to leave a band in its final resting place? Although essential at times, reminiscing doesn’t always do the trick (even when spewed into a computer). Bands - unbelievably annoying sometimes aren’t they?

Use Your Illusion, Volumes I and II, Live in Tokyo 1992