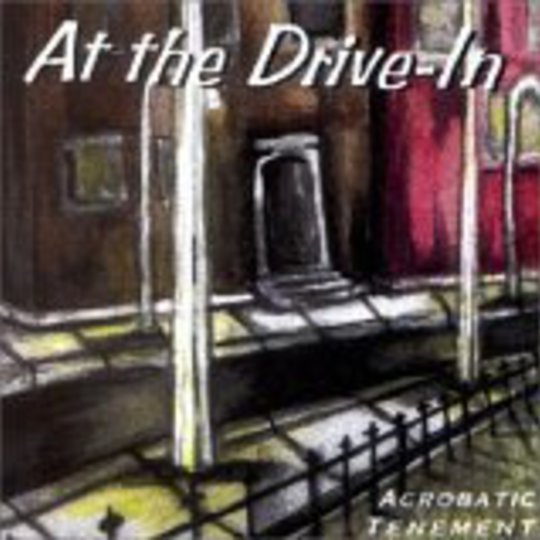 $600....What could I get for $600? According to the poor man's ebay, buyandsell.com, for this princely sum I could have a sixteen inch fibre glass canoe or an ugly, unwanted Canadian Pug. (God must have been really pissed off when he dreamt up this dog) Or, if i was At The Drive-In, I could have recorded arguably the best album of the their career in a few days at the end of the summer of 96.

Ok, so 'Acrobatic Tenement' might sound like a future development from Chris Morris Housing Enterprises Ltd, but this is possibly the best organised, intelligent chaos since Fugazi's 'Repeater' graced our ears in the early 90's.

'Star Slight' is the perfect one minute punk-pop epic, whilst 0'Ebroglio' is a rediscovered anthem - "It's all a facade! And nothing really matters!". Cedric Bixler and Omar Rodriguez display a slick and frenzied partnership that makes them the Torville and Dean of the punk-rock scene (with the obvious differences being that they're not ice dancers who were fucking each other- but Omar does wear some pretty tight pants).

'Blue Tag' and 'Skips On The Record' intro like Sonic Youth before they went all art-wank, with the former thundering along like a blistering fireball of white heat and venom, with Cedric growling like a rabid dog. The wailing and screeching and general scuzziness of this record can make the lyrics seem like a diluted soup of letter (or Welsh TV), where a phrase is occasionally audible - "RAAAAAAAGGGHHHHHH sheepskin coats GRRRAAARGGGHHH" - but it's the energy and don't-give-a-fuck raggedness that makes you wish you'd had this when you were 14.

So, the old ghosts of ATD-I were laid to rest, initially to be reincarnated as the god-awful De Facto, who only proved that in the world of musical comebacks, karma can be a real fucker. The remaining spawnings, The Mars Volta and Sparta have a hell of a lot to live up to