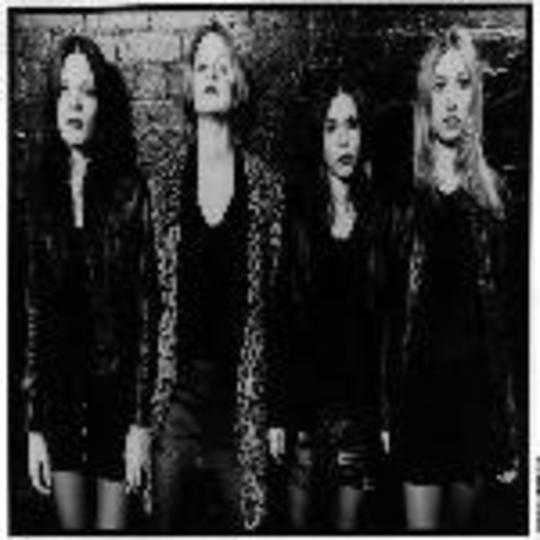 I get some stick from one of the other guys who works on this site, Sean, about some of the bands I listen to, particularly these ones. The sudden surge of 'Riot Grrl' band, to use a wide definition, seems to be taking the world by storm. Bands like Kittie, My Ruin and Twist to name but a few are earning rave reviews all over the board, from NME to Kerrang!!! and back again.

The things is, for every one of these bands, there are other ones that are over looked, some unfortunately so, others fortunately... remember 21st Century Girls, Tampasam and Period Pains? One of the bands that was over looked is Fluffy, a so called 'One Hit Wonder' band with the song 'I Wanna Be You Lush'. Their album, 'Black Eye' died without trace... and that was unfortunate because it is the best album any of the aforementioned bands have done (although I await with bated breath for the Twist album).

From the opening strains of the 1st song 'Nothing' ( " And there's nothing anymore, nothing makes me happy anymore. ") you know where the album is heading... a full on assault of vehement lyrics and angst that will make you hate the world all over again, like the first time you heard a Nirvana album or Rage Against The Machine.

The album is a continuing assault with Hypersonic, Scream and Black Eye, a really dark song about an abusive relationship, with the gravely and hateful voice of Amanda Rootes coming to her fore in the song. The thing about Fluffy, is they aren't the most lyrically challenging of bands, but their music more then makes up for it, and what they DO say, you understand immediately... not messing about with 'Deep and meaningful' lyrics, these girls have got something to say, and say it the only way they know how... in your face!!!

After that, it is slightly more up tempo with THAT single, and the insistent drum beat of Angie Adams drilling into your head all through it. This song sticks out a mile on the album... just for being of a lighter tone then the subjects that the other songs deal with. It's like Deicide singing a full album and including a song about fluffy bunny's (no pun intended).

The following 2 songs are laughable if only for their lyrics... it is almost like listening to Tampasam again. 'Crossdresser' has the gem of "When she was bad, she was very, very bad, and when she was good she was horrid!!!" and 'Psychofudge' a song about drug usage is followed by 'Too Famous' makes me laugh every time with the first verse of "You've got so many fans, they love you not the backing band, You're so fantastic, in fact your great, Oh yeah don't take off those shades!!! " and the song goes on in that vein... reminds me of Michael Jackson and Robbie Williams for some reason.

Songs like Cosmetic Dog ('Your egos bigger then Jesus') and Crawl are the 'fillers' of the album, and it isn't until 'Husband' starts that you hear the hatred again. A 14 track album that concludes with 'Cheap', one of the best songs on the album in my opinion, makes me think of a certain Seattle based grunge band with the tune.....

At the end of it, you know you have experienced female angst at it's most brutal. A female Nirvana... maybe not, but you can kinda hear where those comparisons came from. I recommend this album highly, if only to remind of you of that mid-nineties sound.