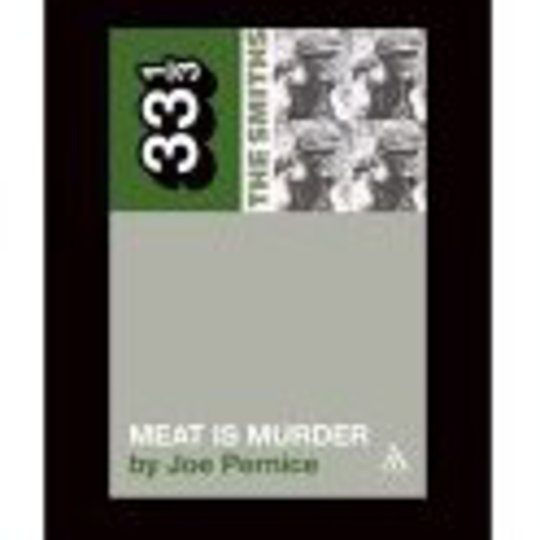 Continuum’s new series of small-scale books on classic albums wastes no time in changing its format.  Instead of being a non-fiction work about an album, Joe Pernice’s book on the Smiths' Meat is Murder is a work of fiction that revolves around and evokes the spirit of the album.

A published poet and a singer-songwriter of some repute, Pernice takes a decidedly American approach to one of the quintessentially British indie classics in this book. Pernice’s novella is the story of an unnamed narrator, an anglophile feeling lost and isolated in the New England of the mid-eighties.  Teen suicide was the order of the day and the Smiths were the kings of UK miserablism an ocean away.  Manchester was an exotic place packed with wonder and possibility.  To a North American, British indie offers music far enough outside the norm of mainstream rock to be different, insuring the listener needn’t fear the horrible curse of empty popularity nor was the music dangerously brainy enough to be unpopular.

Pernice captures the essence of the anglophile UK indie lovers that exist in little groups all over North America, desperate for any validation of their beloved music yet terrified that it might possibly happen and anyone might get in on it.  Even more so, however, is his extended contemplation on the spirit of _Meat is Murder._  This is the heart of the novella, what gives it its spark.

Pernice’s Meat is Murder isn’t about the unrequited love that so often gets associated with the Smiths.  It is about a far more horrible feeling than unrequited love.  It’s about the horrible feeling of being in love and the terrible nightmare of not knowing if she likes you in that way.  She knows you exist, so there isn’t the acknowledgement of unrequited love, it might – might - be requited and that makes it all the more painful, the uncertainty being the killer, the not knowing where you stand or if you stand, or where you could stand.  If she didn’t even know you existed, if she didn’t know who you are, then the certainty is reassuring, you can embrace the pain and glory of unrequited love, thrive in the pain. But if -- if -- something might happen, something could happen, then there is nothing to stand on, nothing to hold on to, you are in freefall, hurtling at the earth at the speed of light.

Pernice’s novella captures these feelings of the despair of possibility, of rushing out to meet the world and the world rushing in to meet you, and the price of that meeting.  As sound tracked by the Smiths.

Siouxsie and the Banshees: The Authorised Biography