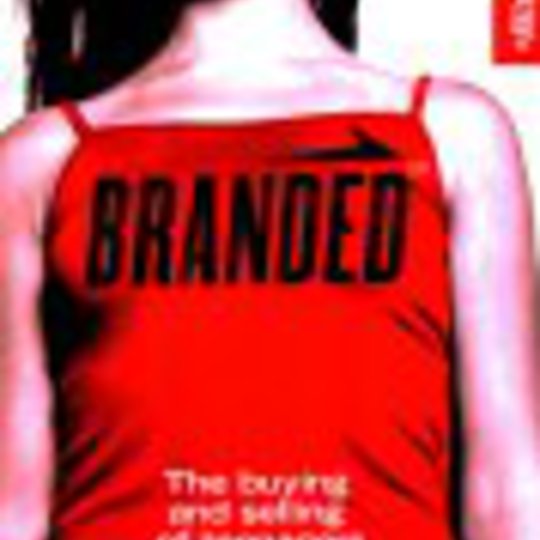 Naomi Klein's 'No Logo' certainly made an impact. Following in the wake of her bestselling tome on globalisation and corporate branding have come a slew of books on the same theme. Like its peers, 'Branded - The Buying And Selling Of Teenagers' aspires to be a worthy follow-up to the success of 'No Logo'. It fails, because it offers no progression, no new ideas.

Alyssa Quart's target is the corporate invasion of that most innocent of states, childhood. 'Branded' explores how children and teens - and the transitional age group between the two, classily monikered 'tweens' - are targeted by multinational corporations. She focuses mainly on the marketing of music, clothes and games to children, touching also on the college entrance system and, rather randomly, the marketing of bar mitzvahs. She devotes chapters and chapters to the teenagers employed by companies to street-team their products, be it by holding tupperware-party-style gatherings to play with makeup products, or by bigging up their favourite bands online - attempting to present a picture of brainwashed youth.

She fails because she utterly lacks discrimination and objectivity. Inevitably, every social commentary will have an agenda to pursue - the writer's skill lies in presenting fact as rhetoric, and leading the reader to draw conclusions that match the writer's bias. Quart ditches this notion entirely, instead choosing to immaturely portray the ad execs and 'cool hunters' identified in other books as iniquitous bogeymen, thieves of children's innocence. Her account of a marketing conference reads like the famous annual witch meeting scene from Roald Dahl's 'The Witches' - one half expects the execs in question to cackle and kick off their stilettos to reveal square feet. No doubt the metaphor is intentional, and Ms Quart believed she was being terribly clever when she wrote it. Sadly it unwittingly sends up the villains as cartoons - and if we don't believe the bogeymen are real, how can we even begin to treat them as a real threat? With one fell swoop of badly aimed adroitness, Quart deflates her whole argument.

Meanwhile her approach to the kids she is seemingly frantic to protect lacks credibility and is, more often than not, patronising. She offers her own judgements and snide commentary on the seventeen and eighteen year olds she interviews, in places implying that they are mindless, undeveloped clones with no capacity for discrimination or foresight. Given the tone of her book, this leaves you wondering exactly how old Ms. Quart is, as her approach doesn't identify her as having much more maturity than the teenagers whose opinions she tramples over.

Insultingly, she also restricts her observations to the rich kids. Her book is full of stories about NY Upper East Side kids getting derided for having last season's Prada - she makes no mention of the cultures that exist on a different economic level, of the kids that rob each other for the high-status trainers they will probably never afford, of the teenagers utterly ostracised at school for totally failing to make the sartorial and economic grade - let alone the sweatshop-employed children who make the trainers in the first place. Her descriptions of the college entrance system focus on a sliver of would-be Ivy League kids whose parents can afford $x per hour for personal tutors. Her tales of $12,000 bat mitzvahs have little relevance to the average reader, for whom even the notion of spending such sums on a childhood ceremony may very well be alien. In her attack on corporate money-making tactics, she barely scratches the surface and misses the biggest evils of all.

'Branded' is an unnecessary book. It reads as a disorganised, disconnected list of gripes and grumbles, badly thought-out, with little depth of explanation or expression, let alone any real underlying purpose to justify her exposé. It offers the usual engaging array of shock! horror! facts for aghast readers to reel off to their less knowledgeable friends, but on a larger scale, it really tells us nothing new. Yes, we know kids are being exploited as a demographic - and their parents secondarily, as the unhappy consumers who must pay for their kids' expensive addiction to things. What's your point? Quart, in ranting at length from a soapbox, forgets to offer any suggestions, any solutions, any kind of alternative - a sharp contrast to her apparent heroine, Naomi Klein, who described the guerilla agenda-bending tactics of culture jamming with verve and animation. The final chapters of the book are devoted to praising a narrow slice of the adolescent population who stick it to The Man by holding gigs in their basements on Long Island, but it feels halfhearted, little more than the 20-odd pages her publisher ordered her to tack on in order to make the book even remotely relevant.

Perhaps it's unjust to compare 'Branded' with 'No Logo' - however the book is set up - even by its audacious blurb - as a successor to it, and must expect to be examined alongside it. The impression 'Branded' leaves is that Quart read 'No Logo' and thought she'd have a bash at doing something like that. Inevitably, Branded finds itself swallowed by 'No Logo''s massive shadow.