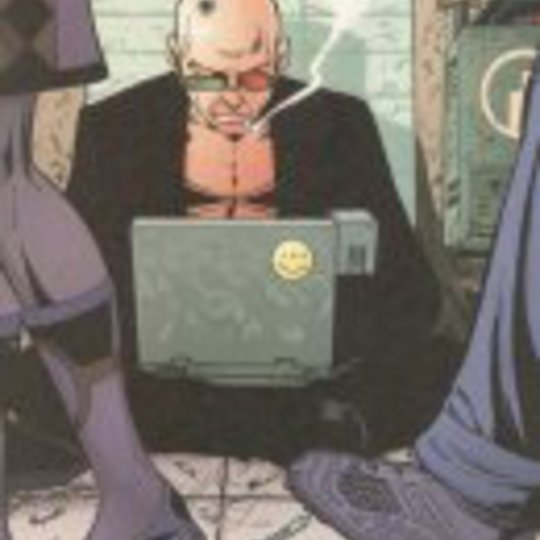 "I write a column for The word newspaper called 'I Hate It Here.' The joy of living in this City has worn off. I sense, vaguely, that I'm finally as beaten as everybody else. I sense everything vaguely these days."

Back from the mountain that he called his home for 5 years, to the City, a nameless place in the near-future North America, nameless because it is every city you've ever been to, it contains everything that has, or will ever happen in a city where races and cultures from the globe interact and either evolve to fit in, or devolve into squalid ghettos.

He writes his columns, powered by hate, by hope, by need, all to try and get to The Truth. He is Spider Jerusalem, both more than the average man, but at the same time less than him, he's a journalist, a writer, a natural at both, he doesn't provide social commentary as a means to further his career, he hates his career, he uses it to expose The Truth, to get social justice, to make people think and see. He does it because he hates you, and you love him for it.

Warren Ellis' Transmetropolitan is spread over 5 graphic novels and counting, starting back in 1997 with 'Back On The Street' and the 5th instalment, 'Lonely City' out 2 weeks ago with the 6th, (serialised into comic book sized episodes, as are the previous 5, collector kids) being written as I type, this is a solid series of books, detailing Spider's life in the City via a collection of his columns, commentary on current events that can very easily be mistaken for contemporary news items, half by intention, half by the simple nature of humanity to keep making the same mistakes.

Story lines are also introduced and revisited throughout the volumes, the City comes alive with all manner of religious groups "Free solid gold shotgun pendants currently being given away at the church of Cobain's booth.." and political organisations, different yet somehow the same... All adding to the background of people and groups essential to every city, every human civilisation, the tension between them being the oil that runs the wheels of progress

While there are background episodes in each volume, the main story line is one of politics, high-class presidential elections and low class, brutal, repression and control, you will see characters you know from talk-shows, from party political broadcasts, from newspapers, people making the same mistakes repeated throughout history to a stage where what they say is more than who they are, than who you are.

An election is rising, Spider is contractually forced into covering it, something he swore he'd never write about again, he gets drawn in and people get hurt, the very people he's trying so hard to save, fuelled throughout on a constant stream of both old and new skool drugs and stimuli he battles on to try and save the Truth, making powerful enemies and, much to his growing disgust, a powerful fan base

He is the writer you all want to be, he reads Hunter S Thompson , he has a gun that will make you prolapse, a smoking habit that would make a coal miner cough and a genetically engineered cat designed to kill geckos

Published by DC Comics, the world of Spider Jerusalem, of the City, has been growing in popularity for the last half decade, there is more to comics than the X-Men, Spiderman and Batman. The lack of censorship and at times oppressive reality of Transmetropolitan might make it harder to find than a quick visit to WHSmiths, but it also makes it so much more worthwhile, the individual issues are getting harder to find but the collected, graphic novel style volumes are available at or through all book shops, think Waterstones, think Amazon, so those without a local comic shop can find The Truth also. **_"My name's Spider Jerusalem. I am the most beloved man in this City. I am a journalist. I write a column for a newspaper called THE WORD entitled I HATE IT HERE. Because I do. I hate it and I hate you. And you love me for it. That's the way it works. And if you argue with the way it works I'll kick off the top of your head and shit on your living brain. And you will love me for it.

The graphic novels 'Back On The Street' 'Lust For Life' 'Year Of The Bastard' 'The New Scum' and 'Lonely City' are out now on DC Comics VERTIGO, Stories by Warren Ellis and art by Darick Robertson