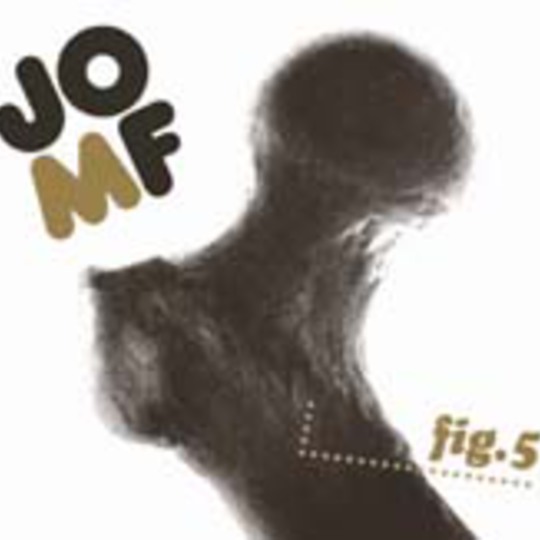 Originally released on Road Cone back in 2000, 'Fig. 5' was a record that looked back to the previous century and pushed forward into the new. Almost like a short hand Harry Smith, the album is an anthology of American music – although instead of the academic approach that Smith took in painstakingly, comprehensively capturing and cataloguing the pure folk and bluegrass of old, JOMF take things from memory, putting their own freewheeling spin on folk, spirituals, blues and jazz and moulding it into a modern sound all their own.

Bleary opener ‘Analogue Skillet’ starts things on a queasy, seasick note. Synth notes bob, bend and warble, producing a strange, droning, Doppler effect, whizzing past the listener like vehicles on a Tron superhighway. The drones and bleeps give way to the empty spaces of ‘Native Einstein’, whose bells and cymbals and scraping violins seem to speak of desolation and loss. The track builds tension and momentum, never quite slotting into a steady rhythm or melody. The next track, ‘Your Cells Are In Motion_’ comes then like a salve, with its cyclical guitar line and martial drums, instantly grounding the listener with melody and pace. JOMF build on these with a droning guitar and wordless vocals, the drums becoming more insistent, the guitars growing louder, hitting a transcendental, joyful post-rock breakdown.

Indeed, unlike many other ‘free’ noise ensembles, JOMF manage to instil real energy and humanity into their work. ‘Go Down, Old Hannah’, for example, relies almost solely on a chorus of voices singing the old spiritual straight, giving the listener a welcome break from instrumentals, keeping it organic by allowing the voices to blend and drone naturally, only building the instrumentation towards the song’s climax. Similarly, there’s a naïve, almost pop sensibility to their work, most evident on the delightful ‘Beautiful September (We Are Going There)_' - a straight ahead pop song that bears a striking resemblance to Beat Happening, with its wistful, woozy melody and dreamy female vocals.

'Fig. 5'_ has lost none of its power and impact since its original release five years ago. It's a record that’s old fashioned and brand new all at once - precise without being fussy, instructive without being patronising, an experimental record that’s full of passion and warmth.