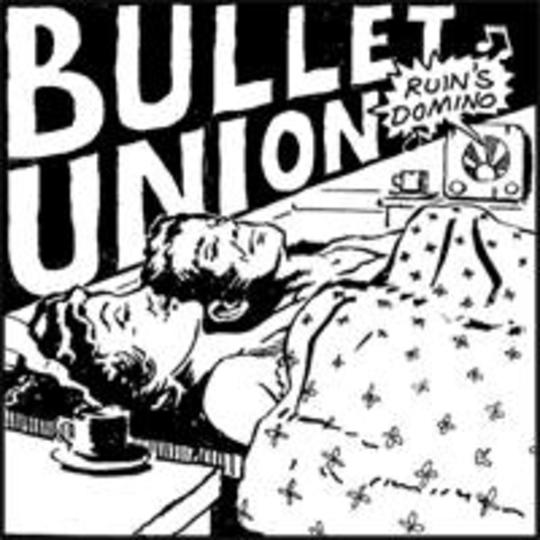 Be fair, few debuts are ever as visceral or as electrifying as certain corners of the press suggest they are. Kasabian’s eponymous effort, full of attitude and anger? Is it fuck. This, however, is.

Bullet Union are something of a mainstay on London’s punk circuit, but that doesn’t mean they’ve not stretched their wings in the past. Indeed, last year’s trip to the Sant Feliu festival in Barcelona gets a mention of sorts here in the appropriately titled instrumental ‘Sant Feliu’. But let’s not get sidetracked - opening a Bullet Union review by mentioning their sole instrumental number is misrepresentative in the extreme. At five minutes long, the track is an oddity on an album of searing, straight-ahead punk rock that takes not one prisoner. All will be swayed. All will be slain.

Debut single ‘Stay Indie, Don’t Be A Hater’ summarises the ethics at work here fairly well, and also stands as a suitably representative track. Vocals are delivered speedily, with both a roar and a rasp, over a twin guitar and rapid-fire drum backing that sounds dangerously close to an out-of-tune squall on numerous occasions. Of course, it’s not - it’s just that the ears of today aren’t used to punk delivered in such a manner. They’ve been pacified by the abundance of crossover acts happy to compromise integrity, and grittiness, for a couple of dollars more. Bullet Union had no huge budget to record this nine-track effort with, and it’s all the better for it. Buy cheap and you buy twice? I think not - buy this and it’s all you’ll need.

Much has been said in the past of members’ previous outfits, but this eponymous release betters pretty much everything that these four musicians have accomplished before. It’s both frighteningly immediate and rich in potential for longevity. As singer Jodie’s voice threatens to break down altogether on ‘Ten Pence Piece’, the band’s one hundred per cent effort becomes deafeningly obvious. Real and utterly sincere, Ruins Domino is a vital shot in the arm of contemporary punk.