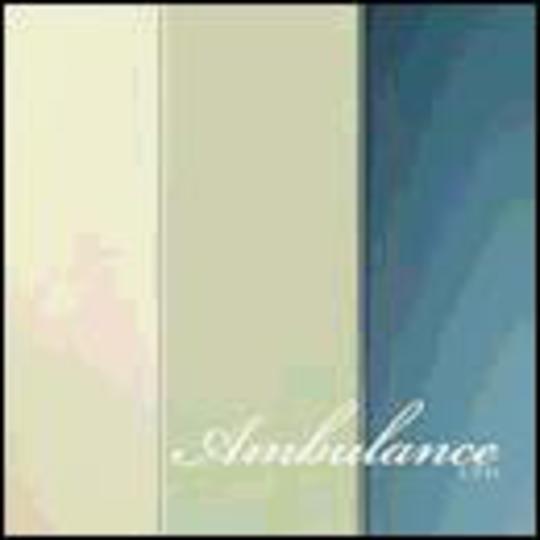 Could somebody please go up to Ambulance Ltd and tell them, "It's OK. It's alright to be a pop band. No one will mind. They won't get at you. We'd all just like to see you a bit more, y'know...comfortable with yourselves..."?

You see, somewhere along the line they seem to have decided they need to try and be cool. A fact which almost completely destroys the first three and a half songs on their eponymous debut, until halfway through 'Heavy Lifting' when they relax and drift for the first time into their natural habitat - clanging, crisp mid tempo songs crammed full of arpeggios and subtly rolling dynamics.

I don't like to dwell on the bad bits, but the forgettable vacuum of the opening instrumental 'Yoga Means Union' and the would be mean and moody 'Primitive' really aren't doing them any favours.

But then after a couple more artistic false starts and nearly-getting-it-together moments, the clouds part and Stay Where You Are' shines through with its grainy 12-string splendour and thrownback halo backing vocals and they finally seem to wake up to what they are: a good pop group.

That's not meant as a term of abuse. Not everybody has to break new ground. Not every band has to be difficult. Most people are far more fun to be around when they're happy than when they're trying to show off. Why should a record be any different? If more good bands were prepared to just make uncomplicated pop records, the world would never have had to suffer Maroon 5 filling the gap (who Ambulance Ltd do sound a tiny weeny bit like on 'Sugar Pill', I'm afraid to admit).

So for the second half of the record, they finally just get on with doing what they do best. Brittle guitars hover around the edges, Marcus Congleton sings away in his fragile, whispery, slightly Elliott Smith fashion over carpets of backing vocals and their loose-limbed rhythm section. It could be the tone of the vocals or the slightly pedantic elegance of the arrangements, but at times they almost start sounding like the first Auteurs album (albeit without any of the bitterness, misanthropy and terminal Englishness, but musically at least), which is a very good thing indeed.

As they say in the final song, "you don't need to study to get straight A's". They should take their own advice and stop trying so hard.