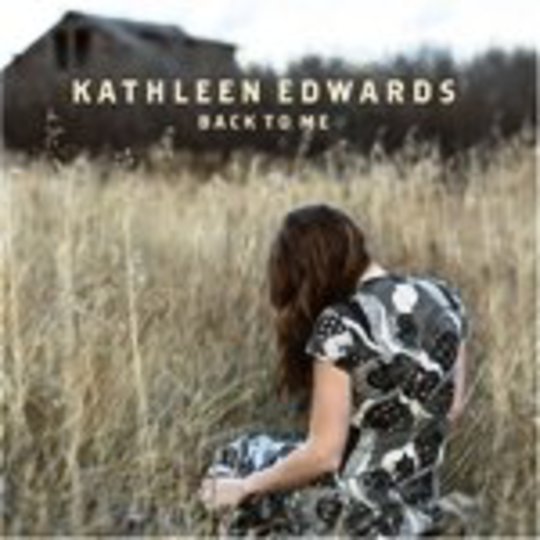 "It's always been important to me that my records work as an album, that it isn't just a collection of songs but something that creates a real, vivid, three-dimensional portrait. And I don't want to rely on the same dynamic and style on every song. I want to use every crayon in the box, and I feel like I accomplished that with 'Back To Me'." This is what alt-country artist Kathleen Edwards has to say about her second album 'Back To Me.

Well, she might not have used every color in the box but she certainly does a good job of working her way through a spectrum of hues and shades. If DiS had to pick what color she chose, it would have to be blue.

The album follows the 26-year-old's 2003 debut, 'Failer,' released in Canada by Maple Music and in the U.S. by Zoe/Rounder. 'Back To Me' was recorded over a period of about nine months in Toronto, and then mixed in Los Angeles by Jim Scott. Edwards' touring band was there to provide accompaniment, as well as moral support, their chemistry adding to the overall polished sound of the album.

Lyrically strong and very well-done, the music of the album comes across as very cool and laid-back but not impressive upon your first listen. The songs are pretty much all fairly simple; vocals, some guitar, maybe some piano, and a few other instruments thrown in the background. For its simplicity, the lyrics cover a broad range of emotions, ranging from confidence to dispondence. It's definitely a CD you could put in and listen to all the way through non-stop but one has to be in a certain mood to want to. This is the kind of album for the 'rainy day' collection... or perhaps when it's time for a nap.

Yet, the album's title track opens with a menacing guitar riff and Edwards' slightly mysterious vocals, leaving one to wait for the song to take flight. With its bouncy guitar riffs and driving percussion, 'Back To Me' is perhaps the most radio-friendly track on the album. 'Away' comes across as almost ghostly in its tone. Singing of the loneliness of being away from home (or returning to find things completely changed), one can mentally see someone coming home and roaming the halls of an empty house or strolling down the main street peering in the windows of neighbourhood hangouts long since gone. 'Pink Emerson Radio and 'Good Things' both reflect Edwards' ability to weave small pieces of her life into each stanza of her songs, eventually revealing a detailed portrait of her life to her listeners by the album's end.

The only potentially bad thing about Edwards' style is that many of the tracks on the later half of the record tend to all bleed together. Then again, sometimes it's nice just to have some calming background music for a mid-afternoon snooze.

That said, 'Back To Me' demonstrates Edwards' prowess as a top lyricist, as well as her ability to produce rich songs with even the most basic of instruments or back-up. The chill atmosphere created by most of her tracks is highly comparable to the effects of Josh Kelley's acoustic guitar and mellifluous voice, and the album's ability to span such a spectrum of human emotions will make it undoubtedly easy for it to gain new fans and praise alike.