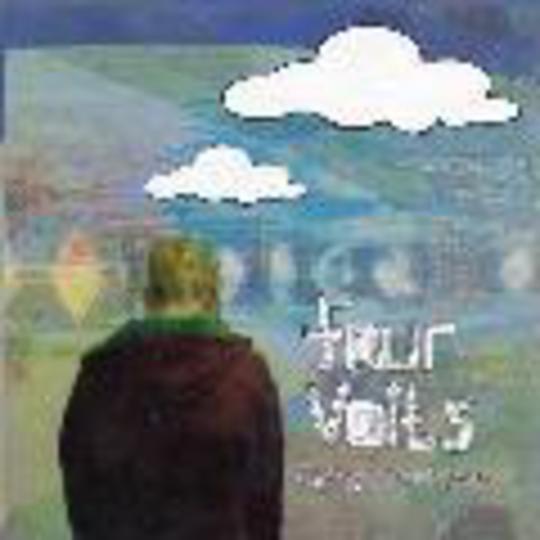 If I tell you that they were almost sued by the makers of the Muppets over their previous choice of band name (Bunsen Honeydew, for the information of Muppets fans), and swooned over by such luminaries as Graham Coxon, Beck and the Television Personalities, this debut offering from New Yorkers Four Volts may have you halfway convinced before you hear a single note. But that would obviously make for a piss-poor review so let me ask you this:

Remember all those nights that you spent getting high/drunk/laid listening to The Pixies? Well when these boys and girls did it, there must have been an instrument or two lying around. But not for a minute does ‘Triple Your Workforce’ sound like a rehash of the works of those that inspired it. The sound of the record is often a lot fuller than that conjured up by Frank Black et al, yet frontman Danny Tieman**’s vocal delivery is no less ferocious and if it’s lacking in heart-bursting classics like ‘Velouria’, there is a lot here to indicate that, potentially, they could scale such heights.

'Sunday Night', for example, is a triumphant finish to an album that sounds like a great weekend. The jaunty rhythms at the advent of the album are the butterflies in your stomach at the end of the working week, and the record never ceases to be as fun as a Friday night wisely spent drinking too much, chasing the opposite sex and smashing the shit out of bus-stops. ‘Way In’ soars; ‘Hat Trick’ smoulders with measured Sonic Youth cool then explodes like they always threatened to, while ‘Rearrange Me’ is The TV Personalities if they lived up to their name by appearing on the OC; a rolling, rumbling bassline egged on by bowling, bouncing, vocals that shine with wistful nostalgia.

Four Volts are post-punk pirates, fun but threatening, incongruous yet harmonious, inherently crazed yet still, at times, darn clever. Whilst plundering the treasure of those that sailed these waters before them, they put their own mark on what they find; the four-piece diving into pretty much all the various pools of post-rock and coming up for air with something that is to my ears unique. This is where they conquer as others around them fall. As most of their contemporaries are quite happy draining every last ounce of excitement from the late 80’s-early 90’s sound that they blatantly pilfer, Four Volts reclaim it as their own. Imagine Autolux having fun. Hard isn’t it? Well some of the vocal parts on this album taken separately wouldn’t be out of place on an album like ‘Future Perfect’; the laconic nuances of bassist/vocalist Lisa Cuomo in particular, but somehow here they just sound like more.

This record won’t save your life, but the point is that it doesn’t want to. It is variously ethereal, (the white noise of ‘Outpost’), sexy, (‘Hat Trick’), and just damn plain silly, (‘I’m Not A Psychopath’), but never in an inane fat-man, pulling faces whilst telling a fart joke way. No; pop-punk, post-punk, post-rock, whatever; this entertaining debut shows how it can still sound essential today.

Hammer In My Skull