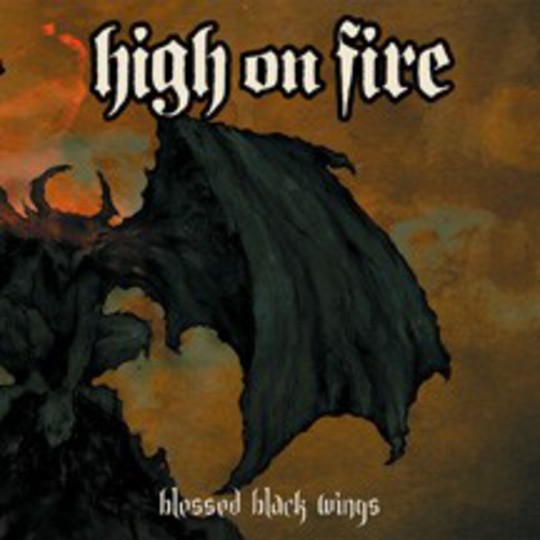 For those of us pretentious enough to admit we own iPods, the shuffle function is both a curse and a blessing, the unquenchable desire to know what track might be next erasing any chance of listening to an album in its entirety.

Non-users may have seen the devastating consequences at flat parties where the host is glued next to the gizmo as its contents spew out of the speakers, a finger always poised to skip any track which breaches their 10-second concentration span, as the guests make the spontaneous decision to go and drink in a nearby parking-lot instead.

For this reason, High on Fire’s decision to split all nine of their third album’s compositions into ten tracks (at random points) is genius, ensuring that to make any sense of the songs involves playing the album as it was meant to be heard.

(Editorial note: this is on the promo version only; the one you buy in the shops will be split into 'proper' tracks. It's also the decision of Relapse to split promo CDs in this manner, in order to combat uploading onto the 'Net, piracy etc.)

It also gives rise to the fantastic hypothetical scenario where, in between tracks by Damien Rice and Katie Melluah, 25 seconds of barbaric noise sends the assorted throngs of partygoers spasmodically writhing about the floor – clutching their ears in agony and wetting their very favourite pair of khakis – during the unfortunate period the host unwisely chose to go to the toilet. Whoops!

For this is an album with its foot firmly to the floor. Opener ‘Devilution’ starts with a rolling drum-beat to herald the forthcoming aural chaos – sounding as though they’re played by the personal drum corps of Lucifer himself – which fade in until reaching the requisite volume for the guitar tone from hell to kick in. The distortion swirls hesitantly around the drums for a few bars, but then kicks with a fucking passion, heavy as hell but with a sense of purpose that drives the song along with a fearful fervour.

After that Motorhead-fucking-Slayer-up-the-mother-fucking-ass hybrid – all pounding rhythms and raging vocals battling against the indefatigably play-as-fast-as-fucking-possible attitude – a lurching guitar riff signals the start of ‘The Face of Oblivion', dispelling the already-unlikely possibility of any mid-album ballads. As the drums crash in and, the acid-tinged vocals scream out again with FURIOUS ANGER, the most pertinent point to be picked up from Blessed Black Wings becomes clear:

This is a FUCKING EVIL album.

If Dido had managed to secure a cameo on this, she still would have sounded less wholesome than Jenna Jameson gargling on the combined sperm count of the England football squad, such is the squalidly masochistic intent behind the nine songs presented to the listener.

As guitar riffs spew out from the speakers which would turn Cliff Richard into a gyrating sex maniac – probably mounting a nearby TV unfortunately showing a Girls Aloud promo – take the time to close the curtains in your bedroom, switch off the lights, walk towards your full-length mirror, and while looking suitably ominous chant "High on Fire" in a monotone voice 666 times over.

After the final syllable is uttered, be prepared as assorted demons, hell-dogs, and Barry Gibb (possibly) come out to skewer your guts, and hold them aloft as they charge into the street to start Armageddon. And make sure to wear some clean underwear, as you probably won’t have time to change before your imminent resurrection and incorporation into the army of Hell.

It can be quite hard to make out lyrics when the vocalist sounds like he has a 40-a-day razorblade gargling habit, but with lyric titles ‘Cometh Down Hessian’ _and _‘Anointing of Seer’ it seems that ex-Sleep member* Matt Pike* has felt no psychological need to sing about the time his mum withdrew the weekly pocket money and stopped him on the school day out…

To keep banging on with satanic references with increasingly strained ‘humour’ would be to ignore that while yes, the album _is_ pretty darned dark, there are enough changes of pace to stop the type of monotony that usually occurs if a band simply try to take things ‘to the max’.

The guitars may be turned up to 11, but there are subtle twists and turns that – while not immediately noticeable – will still lure the listener into an unconscious nodding of the head just before their attention is diverted elsewhere. Not least on the title-track 'Blessed Black Wings’, which has enough epic, apocalyptic riffs to give innocent metal fans neck-strains for several days after first hearing.

Engineer Steve Albini makes a damned fine job of translating the sheer heaviness of the band onto CD, letting the instrumentation breathe without compressing it into an aural sludge, and ensuring the songs don’t revert into an emotionless exercise in the physical limits of extreme distortion.

Beyond the Neanderthal exterior of the bludgeoning riffs and crashing drums, there’s some fucking good songs, and hooks to give High on Fire a deserved chance of amassing an army of devotees. And I can think of little better with which to terrorise the visitors to my next house-party, before I make the devil signs and salute my half-inflated dark lord…