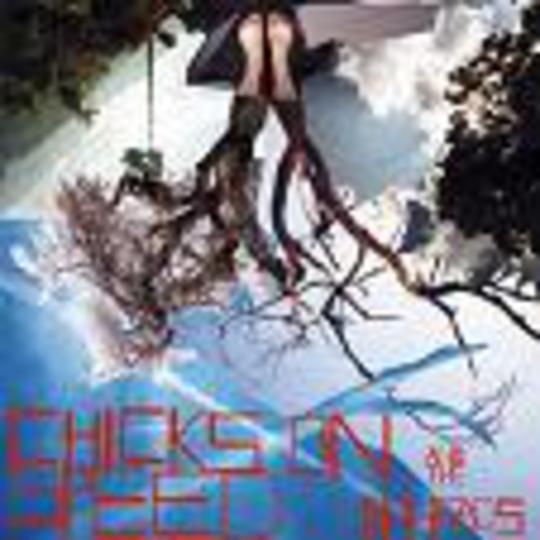 For their next trick Chicks on Speed, your favourite feminist noise terrorists, will join forces with a mysterious Spanish band known only as The No Heads, enlist Cristian Vogel as producer and create 'Press the Spacebar'. Intended as a departure from the electroclash which CoS inform us they’re dismayed to be associated with, it’s three parts aural art, one part backing track to some unimaginable cinematic scene and two parts cut’n’paste soundscape. Those who’ve been doing the maths as they went along will realise this adds up to a six-pronged attack on all things musically expected.

'Press the Spacebar' often sounds a bit like The Slits and is sometimes slightly reminiscent of early Le Tigre. At other times it sounds like nothing else on (this)earth. It features trumpets, explosions, feminism, class war, howling winds and radio interference all thrown together in a patchwork quilt of sound. This album is a strong reminder that CoS were originally intended as an art project and only later became a band; it comes across very much as art first, music second. A fair part of the album was improvised and this comes across in the organic, experimental feel of the music. It has an impulsive, work-in-progress feeling to it that gives the listener a sense of having a window into someone’s private life, making …Spacebar quite an intimate-seeming record, despite the scratchy, uncompromising nature of the music.

And '…Spacebar' is a very compromise-free record. CoS and The No Heads have created their own self-contained musical world and they’re not going to leave it and come to you: it’s up to you to go to them and to put the effort into listening to a somewhat hostile album. Is it worth it? Well, yes. At first listen, 'Press the Spacebar' seems a baffling, deliberately cryptic attempt to alienate as many people as possible. Play it again, however, and it all starts to make sense. It’s great fun, for a start; the scatty, impulsive noise of a band having a laugh as they mess around with the noises music should consist of, an approach which resulted in 'Hand in My Pocket' featuring the sound of biscuits being smashed. The first listen’s bewilderment is replaced with the sense of energy this album does have, even if it is a flailing, dizzy energy which seems to be flying in a thousand directions at once. You start to get into the music, and all of a sudden you’re listening to 'Press the Spacebar' as though it were perfectly usual to be tapping your feet to the sound of a vacuum cleaner and swaying percussion-backed shouts of “Class War!”("it doesn’t exist any more/yes it does, it does exist/no it doesn’t"). And you impulsively find yourself really, really enjoying Chicks on Speed and The No Heads’ unorthodox take on music, politics and the pushing of boundaries. Hurrah for all those who delight in confounding expectations, especially when the results are this unexpectedly, paradoxically delightful.