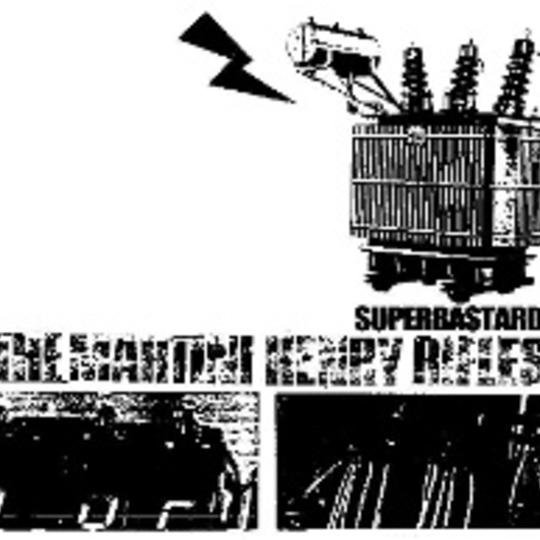 * I don't know about 'Superbastard,' but The Martini Henry Rifles are definitely noisy bastards.*

The Cardiff mayhem trio get straight to the point with opener 'Fired Up On Goofballs', with swirls of knife-slice guitar and bouncing drums that hurl themselves at your head from a half-mile run up. Unlike most noiseniks, the Martinis re-jiggle their wares to make something hugely different for each track. 'Message From John Wayne's Father' rams its fist down your throat for two-and-a-half minutes of crumpled up distortion, broken beats, and one note vocals. Pretty damn near perfect it is too.

Okay, it's clear they've taken hefty bites out of the arses of their several influences before regurgitating them onto 'Superbastard', but each collop (yeuch!) surges with fresh life in its new lodgings. Perhaps it's bursts of guitar, eerily similar to fellow Cardiff band Mclusky, an entire drum patterns lifted from ...Trail of Dead's 'Mistakes and Regrets' that lands fully formed as the spine of _'Pan Am', or maybe some intense complexities from **At The Drive-in, but whatever, dues are paid then exciting cacophony reigns.

Apart from wicked kick-ass tunes, they're a bit handy with the song title too. What do you think of 'Gippo Kids Ate My Hamster' or even the better still _'Run Jimmy Run Run Run You Fucker'?

Despite The Martini's 100% punk-dom, their wastrel public image conceals a recording that's been executed with enormous brilliance. Go check out JSBX's controlled bedlam on their '94 album classic 'Orange' if you want to see where I'm heading. But however they've gone about it, it's a long time since punk rock has sounded this fresh or this furious and fun.