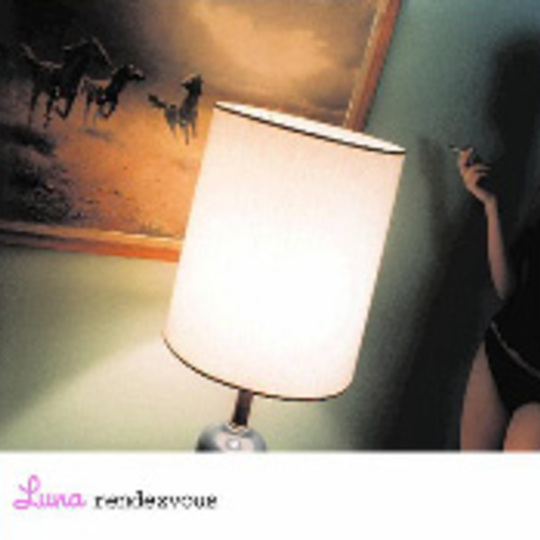 Luna have made seven albums and this looks like being their last.

One of Dean Wareham's given reasons for retirement is that "there are too many bands out there, travelling around, singing their songs etc." They've always been a very good band, rather than a great one. They've pinned their flag to the Velvets' mast and touted their lucid, off-kilter guitar rock around the globe for more than a decade, playing some fine solos and writing some very good - but again not great - tunes.

But two minutes into 'Malibu Love Nest', the opening track on 'Rendezvous', there's a moment of echoing guitar, a soaring lead line harmonised by another, quieter guitar track and it's so wondrous, it's enough to make me listen properly to the whole rest of the album and grab an unexpectedly outstanding and uplifting experience! Right mood, right time, maybe but they've raised their game and Luna render themselves indispensible just as they dispense _of_ themselves. How annoying.

I'm on platform 13 at Clapham Junction. I thought I'd missed the last train, running into the station at ten past one in the morning, but it's delayed - oh thank Christ - and I'll catch it and make it home tonight. I'm so relieved, while everybody else around me curses their delayed journey and grumbles about the train system.

Check out the duo-vocal chorus on 'Broken Chair' you miserable fucks, it's delicious. The Hawaiian-tinted guitar that Ira Kaplan is over-using these days is here, but just present enough. Wareham's daft Lou Reed lyricism is finally endearing, taking itself lightly enough to startle and amuse instead of cheesegrating. "Chairman Mouse... Chow Yun Fat..." on 'Star-Spangled Man'.

I've always placed Luna, rather unfairly, in a trio of bands, along with Low and Yo La Tengo. Can't remember what the original link point was - not specifically music, though you'll understand there are connections, if nowhere else, in their male/female vocals and the tender, linear lead guitar lines. Anyway, it's always been a heirachy with Yo La Tengo sitting on top while the other two meander about underneath, except when Low pulled fingers out and made 'Things We Lost In The Fire', which was their 'better-than-Tengo' album for me. Now Luna have achieved the same feat with 'Rendezvous'. I wish Yo La Tengo had made this album.