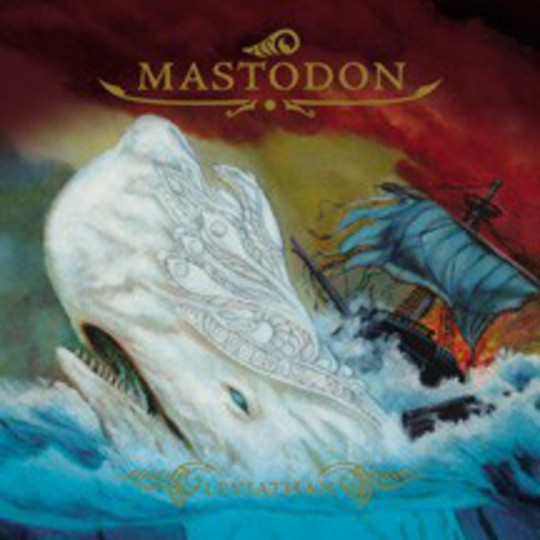 Okay, let’s cut to the chase here: Mastodon *are one of the most important bands in metal today. *Fact. When their immense debut ‘Remission’ emerged in 2002 no one could’ve predicted the deafening buzz that followed. It simply slayed all in its tracks, including DiS. It was the sound of a band revitalising a genre, carving itself a monstrously dynamic path of its own that was to send sparks flying through the heavy music scene.

And here it is: Leviathan. Every bit as threatening and imposing as the title suggests, it’s an album that reflects the mysterious darkened depths of Leviathan’s oceanic territory; an album shrouded in a barbaric primeval mysticism inspired by Herman Melville’s _Moby Dick _and exacerbated by the unsettling imagery of artist Paul Romano.

This is something that’s living and breathing, that’s calculating and unpredictable; a lumbering beast with fire in its eyes and vehemence in its stride. It’s a sound that burns with a strangely majestic malevolence; an animalistic charge that bolts out of the speakers with a tremor-like force, flinching wildly against the kind of off-kilter syncopation that their Swedish forefathers mastered years ago. This is why Mastodon are so important. Their music pulses with passion, with soul. And, ostensibly, this is the raging spirit of Leviathan, savage ruler of the seas, cruising through murky oceanic depths with an exhilarating, teeth-rattling prowess. As it tackles the mysteries of the deep, Mastodon’s true abilities shine. Deftly syncopated riffs batter themselves senseless against curiously convoluted rhythms and prog-like sequences, particularly in ‘Megalodon’, its exposed bluegrass interlude that prefaces some riveted Southern-sludge grooves providing a nice eccentric excursion before 'Iron Tusk''s deep, stoner-fuelled riffs - potent enough to send superstitious shivers rippling through your soul - grate and groan with a coarse rhythmic tenure.

Yet still this is just one side of the Mastodon coin – elsewhere things get much more menacing. Imagine the likes of Meshuggah, *Metallica *and *Entombed *cast into hell and 'Aqua Dementia' would be the sounds of their ghostly spirits rising up through the embers; a last gasp groan; a feral demoniser so dark, doomy and malevolent it chugs with an irresistibly bleak pulse, choking itself of whatever slithers of melody still loom deep, like *Isis *salvaging itself from a bleak, muddy whirlpool of despair.

Elsewhere the maddening imagery continues, with Clutch's Neil Fallon guesting on 'Blood and Thunder', imitating the crazed, drunken Captain Ahab himself as he screams at his men to to catch the great Moby Dick.

Far from predictable _Leviathan _is a thoroughly engaging ride from beginning to end. Drummer Brann Dailor’s disorientating technicality in the likes of _‘Hearts Alive’ _staggers you dizzy, whereas the colossal A-bomb riff that drops in opener _‘Blood and Thunder’ _is just ridiculously, _titanically _heavy. This is a hulking monster of a record that only grows more intense with every listen.

The future of metal? You’d better believe it.