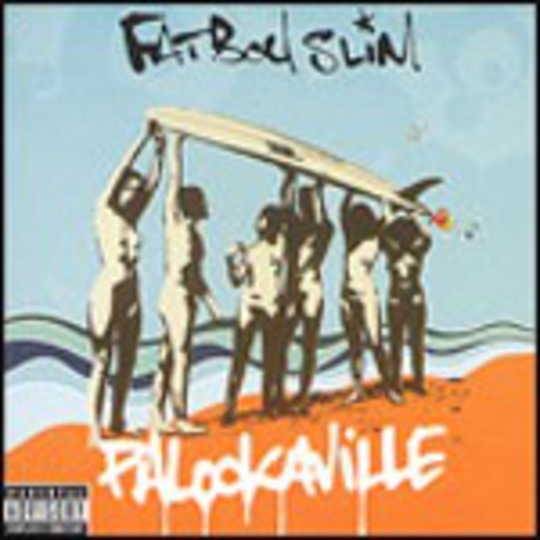 Back in the hot sweltering summers of the late nineties, where everything seemed A.O.K, and all we had to worry about was whether England really were going to win the World Cup/European Championships, and who had nicked our copy of London Fields, king of all he played comedy records to was nearing middle-aged professional disco biscuit king Fatboy Slim. Then, amidst new found fame and marital strife, he ducked out of view. To be honest, most doubted that he had another Bentley Rythmn Ace Pro record in him. But, erm, he does.

'Palookaville' is as naff and unpleasant as its baby blue and orange cover aesthetically suggests. And for consistency's sake, such mediocrity is achieved from start to finish. To kick things off, we have '_Don't Let The Man Get You Down' which begins as a 'Praise You_' Part II; taking a really rather ace folk vocal sample but turning it into a sub-Squarepusher squelch-bass gurn-athon. It's quite horrible. Which is a good way to maintain continuity as we move towards the mashed up junkathon that is the nonsensical 'Slash Dot Dosh', which is the audio version of channel surfing when you're really pished. And on it goes, through the cheerfully naff scat chat of 'Wonderful Night', the unsigned demo-quality of '_Long Way From Home_' where Fatboy Slim ropes in some dog-on-a-string local band nothings to do a shit Lenny Kravitz impression... it goes on and on, into a void of inoffensively moulded despair.

Listening to 'Palookaville' it's hard not to resent Cook for making something so naively upbeat and depressingly bland. Doesn't he know that there's a war going on? Lots of them? Challenge me, GODDAMMIT! The Ibiza-Uncovered, blank-eyed, beer swilling hedonism of the 90's may have been accommodating to your muse Mr Cook, but I'd like to think that we're too damn morbid, angry and cynical to take this toss anymore. Possibly that's like telling James Taylor to chill with that hippy dippy acoustic crap, but hey, he can stop too.

The nadir, if only for irritation's sake is the Sesame Street soul of Damon Albarn's 'Put It Back Together' where the Blur frontman does that doe eyed, depressed, cracked voice crap that he's mastered over the past five years. Christ. Fuck off.

Skipping through the rest of the album (professional, I know, but It's hard to take much more aural-rectal rummaging) there's dad-breakbeat ('_Mi Bebe Masoquista'), more 'real rock' guff ('Push and Shove_') and late nite jazz ('North West Three'). Oh and a cover of The Steve Miller Band's 'The Joker' that is unspeakably poor.

Succinctly, it's a crap record. A slightly more evolved critique would tell you that it's an irritating, misjudged piece of musical flippancy that has lost sight of both the giant hook and the ageing fan base who've moved on to Joss Stone, Dido and whoever else you listen to when you give your liver a rest after a decade of caning it. But you don't have to worry about that. It's a crap record, and ultimately, that's all that matters.

Welcome To The North