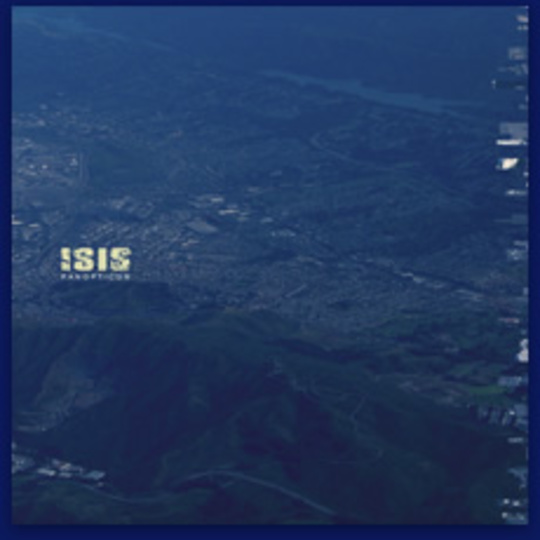 I just read the greatest thing ever: the Earth makes a noise. A low, droning sound is naturally emitted by the interaction of atmosphere, the oceans and the seabed. It's undetectable to us aurally challenged humans, but just think: the world sings. It breathes in, and exhales, just like you. Fantastic, isn't it? And it'd be appropriate, too, if this review was of Isis' last album, the titanic 'Oceanic'. I could make some smart-arsed comment about how the record sings like the very world in which it exists. But it's not. So I can’t. Dang.

Rather less in tune with Mother Nature, a panapticon is a type of prison, designed way back in the Eighteenth Century to ensure that inmates’ activities were monitored around the clock; a forerunner to modern-day CCTV-riddled gaols. It's too complicated for a simpleton like me to explain in depth, but you can read up on the basics here, and explore from there should the mood take you. ‘Panapticon’ can also be used describe a society that is all-seeing, all-hearing and all-knowing; Big Brother, if you will. Thus, you'd reckon 'Panapticon' would be an oppressive record, one that suffocates the listener like a fat warden doing his utmost to stuff a pillow down your throat. You’d go into the experience expecting darkness and terror. Yet it’s a misleading title; nothing terrifying emerges from the multiple layers of sound. Indeed, as far as Isis records go, this is positively joyous – even Aaron Turner sings as if he’s shot-through with that Friday feeling.

Introductions over, let’s cut to the chase: I can’t tell you if you’re going to like this. Isis records don’t work that way, and if you’re one of the handful of people reading this that own previous material, particularly ‘Oceanic’, you’ll be well aware of why I can’t break this down into easily analysed pieces. ‘Panapticon’ must be absorbed wholly. Last night I sat with it and let it have me. It filled the room, and then the next, and then next door, and then the street. My walls aren’t porous, but ‘Panapticon’ breached them as if they were made of rice paper. That ‘Backlit’ and ‘Altered Course’ are two of the most emotionally engaging rock songs of a decade, or more, matters little: they are but part of a much bigger picture, a picture that can neither be seen nor held but must be felt.

Isis have never sounded so organic; this truly is music that lives and breathes like the Earth itself, all limp tie-ins with that first paragraph aside. People speak of the ebb of tides; this has an ebb all of its own. It laps at your ears like the sea does at your feet. It caresses them, before brutally laying them to waste.

Be fair, no Isis review is going to skirt around the fact that THEY ROCK SO HARD. Fact. That this is the metal record of the year is indisputable, to these ears at least. Don’t let that – ‘metal’ – put you off though. Isis aren’t Mastodon or Neurosis or Converge; whereas 2004 records from those bands have balanced a degree of subtlety with all-out war riffage, ‘Panapticon’ is an altogether more ethereal beast. I want to listen to it every hour. I want to be listening to it right now. As soon as I finish this, I will. It’s the only record that’s speaking to me right now; the only one that’s making me excited about music, this thing that we take for granted, such is its omnipresence in our lives. I never want this feeling to end.

Somehow Isis are in tune with the Earth. Don’t question it, just accept it and enjoy the ride. Same time, same place, 24 hours from now? See you there.

The Soul Of The Rainbow And The Harmony Of Light