All Ears, All Eyes, All The Time 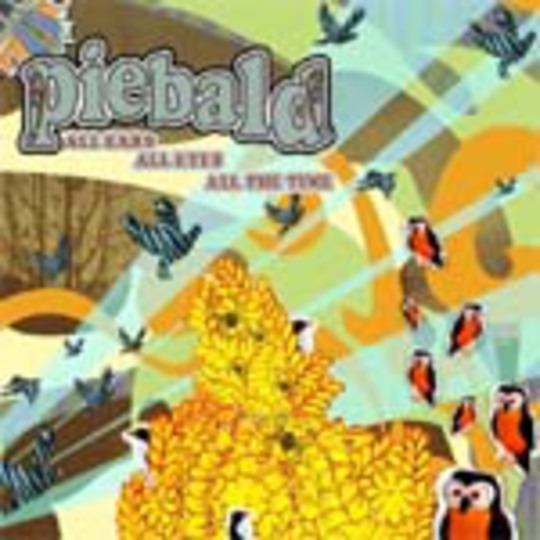 Anthemic indie-rocksters Piebald *have made an influential hobby out of soulful angst-less emo for almost ten years now, slyly evading the mainstream through songs which always seemed to capture the rollercoaster feelings of growing up through poignantly lyricised choruses laced with enough character to woo the bespectacled, stripey jumpered fans of *Dinosaur Jr *and *Superchunk. Because that’s what Piebald are: strangely affecting, reassuringly simplistic and heart-warmingly uplifting.

Only, on ‘All Ears…’ it seems Piebald have started to grow up a tad. Eschewing his usual satirical wit for a more relaxed, reflective mood, it appears - through song titles like 'Get Old Or Die Trying', 'The Benefits of Ice Cream' _and _'Put Your Slippers On Instead' - that songwriter Travis Sheffel has reached his mid-life crisis before his parents have. It’s a downbeat tone that pervades the album, yet fails to detract fully from such jaunty numbers as 'Haven’t Tried It' and the breezy Ben Folds Five-esque milkman-whistling breeze of 'Part of Your Body Is Made Out of Rock'. The latter’s probably the closest to a radio-stomping choon on here but to even suggest servicing radio with Piebald is off beam as their whole appeal just isn’t radio-conquering superstardom. It’s about being approachable, underground and independent which is what this record emanates in abundance.

But, although produced by Paul Q. Kolderie (The Pixies, Dinosaur Jr, Hole), it simply fails to match the quality of their previous album “We Are The Only Friends We Have”. Sure, Sheffel’s voice soars and pianos tinkle majestically to create an almost magical sheen in parts but with no less than 15 tracks there just aren’t enough frequent Piebald hooks to retain your attention. By the end you’re left a little dejected by a waning songwriting talent that fails to light up your heart with the spark it did before.

This time, all eyes and all ears were on him. Perhaps it’s time to turn the page.