Half Smiles Of The Decomposed 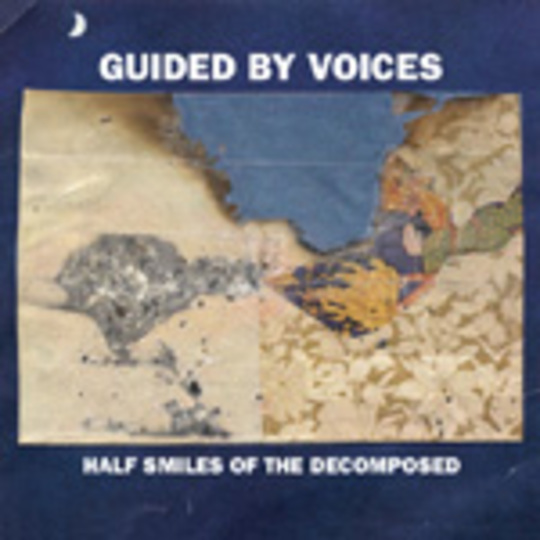 How did it ever come to this? When news that 47 year old Robert Pollard, the world’s most prolific songwriter (15,000 songs and counting), was calling it quits with his chief project Guided By Voices after one final album hit airwaves and broadbands worldwide, hardened indiephiles across the globe mourned the loss of one of the most truly amazing bands of the past 20 years. A man for whom the write-record-tour-repeat dictum was nowhere near enough, he will of course be releasing his songs long into the future, be it under his own name, or with projects such as Circus Devils, The Soft Rock Renegades or Airport 5 to name but a few, but none will have the impact or influence that GbV has had on the way indie exists as we know it.

Admittedly, the band’s previous couple of releases have not been as well crafted as the 28-song lo-fi mini-epic "Alien Lanes", the ‘heads down – it’s time to rock’-isms of "Isolation Drills" or even the much-maligned "Mag Earwhig", but in the knowledge that "Half Smiles Of The Decomposed" (what a title) is to be the final Guided By Voices album ever gives the album a slightly sombre edge over its predecessors. However, rather than being filled with depressing funereal dirges (GbV were never about that in the first place), there’s an odd sense of hope that makes "Half Smiles…" all the more addictive to listen to, although lyrically, the album deals with themes of reflection and memory. This is none more evident than in the album’s opening track "Everybody Thinks I’m A Raincloud (When I’m Not Looking)"; fading in gracefully before breaking into a concise, upbeat 3 minute rock song, Pollard sings of how "This is not my day – nobody really cares anymore", while possibly referring to his songwriting technique ("Everyday, it’s another world"). Meanwhile, guitarists Nate Farley and Doug Gillard trade crunchy powerchords across the speakers, and the tone is set for the album.

From here on in, the album takes in mixes of old and new GbV; the older styles represented by the acoustic jangle-pop of "Girls Of Wild Strawberries", the catchiest thing on the album, as well as the exquisitely mature "Window Of My World", one of Pollard’s best tracks in years. "Window..." has a great contrast between the ‘one man and his guitar’ stylings of the introspective verses, and the psychedelic chorus, although the song’s slightly sugary lyrics ("In the window of my world, a heart’s worth brings meaning") put a bit of a damper on proceedings. For fans of the band’s nu-school power-pop stylings, Mister Pollard has kindly provided a couple of real ass-kickers: both "Closets Of Henry" and "Gonna Never Have To Die" provide some Cheap (Trick) pop thrills, but are also two of the least interesting cuts on the album, as is "Sleep Over Jack", which gives the impression of what British Sea Power would sound like if they were completely devoid of tunes.

To get some real substance from the album, you have to delve into the deeper second half; the majestic "Tour Guide At The Winston Churchill Memorial" is twice the epic 1999’s "Hold On Hope" ever was, with long-time companion Todd Tobias’ production sounding as polished as mid-fi can go. The sparse, Nick Drake-esque "A Second Spurt Of Growth" is truly heartbreaking, with the lyrics looking to the future of both Pollard, and his band – "A second spurt of growth will come about me", Pollard sings over two gentle acoustic guitars, before confidently adding "Don’t doubt me". One of the album’s best songs is "Sing For Your Meat (Leon)", which starts with the most political lyrics Pollard has ever written ("Seek her to kill…are we marching on?"), before morphing into a slow-burning epic; the band slowly enter one by one, until the track crashes and burns, at which point, the simple guitar line returns and Pollard reprises his politically charged intro.

Old school GbV fans will be comforted by the presence of one or two former members of the band’s ever changing line up – Pollard’s brother Jim is credited with "amp drop" on the otherworldly "Sons Of Apollo", while long-time guitarist Tobin Sprout (now a painter and musician in his own right) returns to his post for "...Strawberries" and the album’s grand finale _"Huffman Prairie Flying Field"_. On first listen, it’s an odd choice of closer for both the album, and the band’s career – a seemingly lightweight pop song, with whimsical lyrics about some "mysterious field". But after repeated listens, it all begins to make sense; Pollard’s fantastic melodies and the oddly AOR backing mesh together seamlessly, and the album’s symbolic (and oh-so-important) final lyrics "I’ve come to start up my head/been closed and locked up/for far too long [repeat ad infinitum to fade]" bring a tear to the eye. The album fades out, just as it began, and as the previous 43 minutes of music begin to sink in, you sit and realise that Guided By Voices will never make another album, but seeing as they’ve just released one of the highlights of their career, you wouldn’t want them to blow it now, would you? So ladies and gentlemen, grab a bottle of Miller Lite, and let’s drink a toast to Robert Pollard, and his merry band of Voices; the Fading Captain has left the building, and my god, has he left it with style.