This Is The Tomb Of The Juice 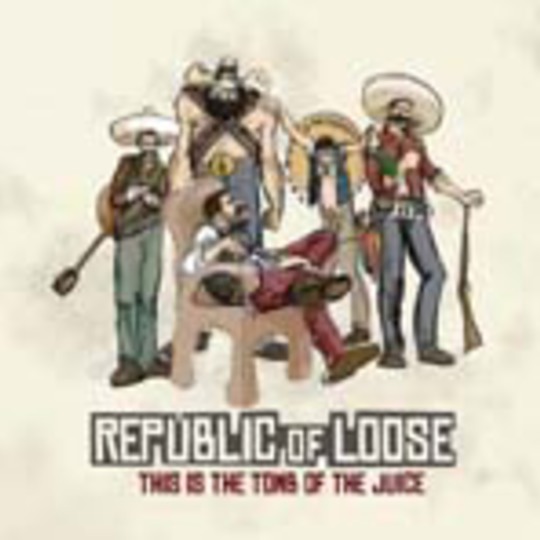 The ‘Loose: Five white guys from Ireland pretending to be five black guys from the Mississippi Delta playing the funk in Quincy Jones basement. Cool doesn’t come any colder baby.

Imagine: There’s this well fed and heavily bearded preacher dude who moves from screaming gospel blues, through rap, up into falsetto swings and manages to finish with a few deep Sly Stone vocal licks that leave you confused, blustered and most importantly a bit fucked in the head. Not forgetting concrete smooth bass grooves, guitars that switch between Chic style chops and Ry Cooder-esque slide work, and drum licks that the Fun Lovin’ Criminals would be proud of if they were actually any good at making music.

This band are so in control of there sound, it’s a wonder the breadth of style and substance we find on debut long player ‘This Is The Tomb of The Juice’ can be harnessed into any sort of track listing; it feels like the songs on this album belong inside the swirls of George Clinton and Captain Beefheart’s shared peyote trance. You will not hear anything like this record for some time.

After a mumbled introduction of intention, ‘Kiddin Man’s hollow guitar syncopation is the signal to enter The Loose’s abode. A dark room, red sofas, TV permanently set to static and enough weed to blow you to mars and back before NASA can even pick up their pipe. This track smells of the dark – the witching hour. It’s a vivid opening picture. Paced jazzy guitar is interrupted by Michael Pyro’s salivating rapping – “What ya talkin’ about whose got money / What ya talkin’ about shit ain’t funny / What ya talkin’ about LA sunny / I don’t give a fuck about LA honey. Equal lines of wickedly amusing rhymes follow. Jesus, where next? ‘Hold Up’ has a riff Mr. Disco Nile Rodgers would suck up and chatter out if he had balls big enough. There’s just so much going on in these songs – rather than simple vocal delivery each tune either sounds like a rabid conversation or a sermon of all things sex. Brez’s solo in ‘Hold Up’ alone confirms The Loose’s desire to harness the sound of balling. Later tracks such as the soul grooving ‘Girl I’m Gonna Fuck You Up’ and the piano dressed ‘Goofy Love’ (which incidentally, has a brilliantly sweet bridge) are also confirmation of the band’s wired work ethic.

Apart from the interweaving of styles and the sheer quantity of sounds and changes that occur throughout the record’s fifteen tracks, what makes 'This Is The Tomb of The Juice' an essential record for 2004, is that the band sound like a gang – a proper fucking band of accomplished musicians. With so many seemingly incoherent and mismatched players making up today’s new music, finding a spiritually hooked and interesting bunch of musicians is something of a rare occurrence. Republic of Loose mess around with everything you’ve ever heard – apart from a couple of neo-classical trills, I think the band cover most bases. Unfortunately the record doesn’t run flawlessly. After the inspired harmonies that colour ‘Something In The Water’ and ‘Slow Down’ and later the undeniably slick and catchy ‘Tell More Lies’, the second half of the record lacks the punch and layering that makes the first thirty minutes so enjoyably twisted. Yes – the first thirty minutes. It just feels too long, so by the time we get to closer ‘Lawn Child’ the energy seems to have been sapped, and compared to the first seven or eight tunes, Pyro’s sermon falls relatively flat.

Despite the dip, it’s a record with flooring dynamic. Laugh at the absurdity of some of the lyrical flourishes; chill to the gospel overtones; dance to the belly full of funk; or just sit and wonder what the fuck is going on. From Dublin via Beverly Hills and Chicago, the new republic now stands before you, so shut the fuck up, ya dig?