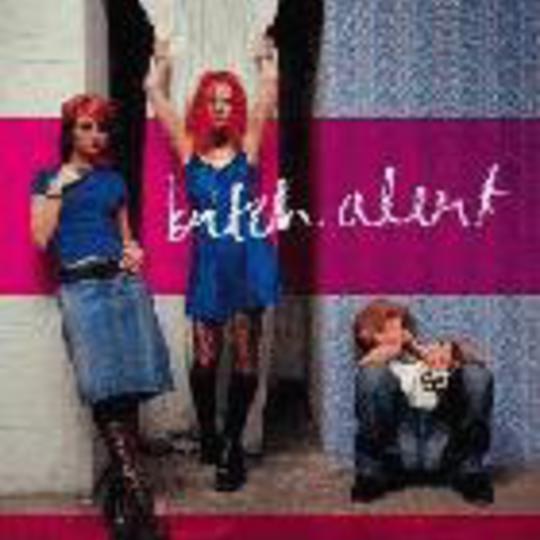 Allow me to give you all a piece of advice: if your first taste of Finland’s Bitch Alert **happened to be in the form of their downloadable single _‘Loveson’ _you’d probably do well do give them a second chance. As perhaps the best contender for a single from this, their first serious album, it’s also the least representative of their scrappy indie-punk style. Produced by T.T. Oksala - better known for his work with H.I.M. - _‘…Rriot’ _is a loud, spiky assortment of buzzsaw guitars and indelible pop melodies, delivered through some feisty, ill-disciplined riot grrl attitude. And it’s marvellous stuff.

That they consist of two girls and one boy is reason enough for them to garner some testosterone-fuelled attention - and although you do, at times, find yourself fighting the temptation to point a lazy journalist’s finger towards the likes of *Courtney Love *and *The Distillers * there's still something all the more fresh and pure about their particularly raw and angsty ballast. Watching vocalist Heidie squirming on the stage earlier this year, like the wretched pop brat she so loves to portray, sneering angrily behind her bright red locks, she possessed the sound of a girl with no inhibitions at all. If she wanted to scream then she SCREAMED; if she wanted to sing she sang the _sweetest _melodies; but if she wanted to screw her face up and growl at the world then believe me: not you, her Mum or anyone else in that room were going to stop her.

But it’s not all frustrated teenage screams. Hang in 'til the last few songs and you’ll find yourself marvelling at a more mature and heartfelt side to the band. _‘Dope Sick Girl’ _is a fuzzy, intimate indie-pop gem while tracks from their previous _‘Songs For Your Wedding’ _EP present an intoxicating mix of The Pixies' lo-fi attitude and The New Pornographers' warm harmonies.

Sure it’s a little patchy in places, but trust me, the sparkle that is there is worth parting with your cash for alone.

Q And Not U