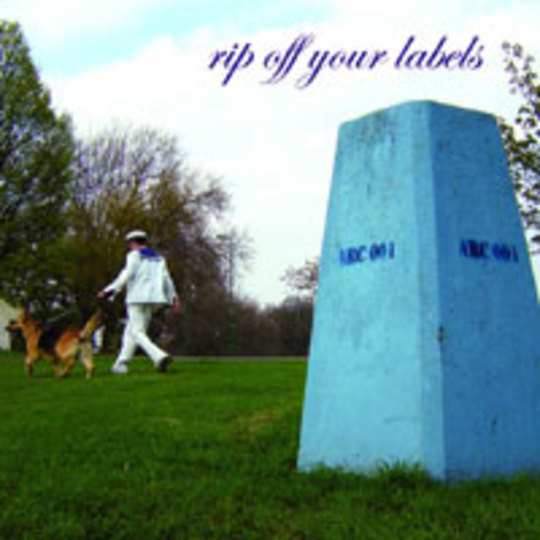 The true artist creates art for herself. What lassos the hoodlums on Rip Off Your Labels into some semi-coherent (anti) philosophy is their refusenik spirit and more simply, that they have tickled the listening ears and pounding hearts of Angular honchos Joe D and Joe M. A delicious meld of seeming contradiction (“We wander without particular aims or goals” or “We want to be on ‘I Love 2004’”), if Angular recalls anything, it’s the ideas behind the moniker of their most NME-rippling charges, Art Brut. As evinced by visual artist Jean Debuffet, ‘Art Brut’ is not exclusively the work of the ‘clinically insane’ (terms he was rightly sceptical about), nor is it a bourgeois parlour game of ‘spazzing out’ like the Dogme film, The Idiots. Instead, it rejects the instinct that ‘mistakes’ should be clipped and polished into some pretty but anodyne piece of fluff. So essentially, anyone can produce Art Brut, and supposedly populist fora, from Pop Idol to sections of the ‘indie’ industry can be exposed for the creative zomboids they are. And no, none of the bands here sound like The Shaggs.

Enough of this cod-theoretic tittle-tattle: sinister demagogues Vichy Government are true polemicists who’ll just have you shot if they can’t change you by lily-livered dialogue. Based around the two notes of Suicide’s Cheree compacted into a puss-spitting caricature of an ambulance siren, I Control Discourse is an indiscriminate spattershot of beats over a nasty background squirm with Jamie Manners spitting a series of scornful couplets like “Writers write books/but I write the writers” and “I eat counterculture/it becomes an extra limb”. Like cartoonist David Shrigley, it takes a special kind of bile to craft minimal materials into something so sumptuously ugly.

But the fear has only just begun. Elephant & Castle tyre-slashers The Violets don’t have a bass player, so they plump up their sound by embedding their guitar plectrums with human teeth that rattle and scrape around the vocalist’s Lene Lovich-style harpy indignation. Class. Meanwhile, call centre operatives with a penchant for highfalutin drama, Lovers Of Today gouge a A Short Nasty Shock of paint-blistering white noise.

It’s sorry testament to the failures of indie-rock (a genre which smugly believed it had ‘equal opportunities’ scrawled in biro on its scrawny ass) that it’s still noteworthy that half of these fourteen tracks are fronted by women. It’s even cooler that this isn’t a Ladyfest Comp where the boys are told, politely, to fuck off. Oh no, ‘cos The Swear want to play a game of reverse-objectification in the duff-notes a-plenty Advert Boy. The crisp melodiousness of the Smiths handbagged in the puss by the Slits, it may not be PC, but like the culturally-approved porn of Zoo et al, it’s just a bit of fun, eh boys?

Know all those bands who think Gang Of Four is a genre and not just some playful Commie miscreants from Leeds? Well, The Long Blondes aren’t one. They like “a man in uniform” they sing in Autonomy Boy – a tale of boredom, feral desire, escape and more feral desire - but, apparently, “that’s not right”.

Gifthorse nauseatingly detail a more decadent tale of unrequited lust, asking that “if you do it/do it out kindness”. 'Happy Daggers' - a nicotine and wine soused lament set to a lethargic Ashes To Ashes stagger - is the sound of damp bedsit desperation with the smell from last night’s fry-up lingering over the stench of junkshop clothes. It was songs like this, and the swooning Auteurs-do-sophisti-pop Trouble In The Palace from Manhattan transfer Elizabeth Harper that kept me, as an impressionable adolescent, with a packed satchel ready to escape to a bohemian London garret, where no doubt I’d be kept in caffeine by selling discarded bus tickets.

What would keep me there would be the pithy whitey-soul of Luxembourg (Let Us Have It) or the lavishly-named Showboys, brigands with the homicidal zeal of Luke Haines at his most evil. “I’m coming home/on the 3-5-1” the vocalist intones belligerently while crystalline guitars tinkle and a bass glisses like a dagger on a leather sharpener. Thankfully, a bit of solace is found in the tender arms of The Boyfriends, whose No Tomorrow encloaks the cold swoop of Joy Division in warm, shimmering pathos. And there’s tentative romance too, in the sultry Cocteau Twins miasma of Sweetie’s Fall Of Your Lies and the 6ths-like melancholia of the The Fucks’ Argos, a shimmy of carouselling keyboards and knotted fingers where ennui and nihilism is salved by beautiful lurve. Hurrah!

But we gotta have a knees-up around the ole fuzztone geetar. In Top Of The Pops Art Brut & Friends offer a joyously defiant antidote to studio sheen, all-over tan and customized bullshit from Diesel by squawking the names of all their fine compadres with varying degrees of mania. From suave (“Lux-umm-bohrg”) to falsetto screech(“The Fucks!”), it’s a frenetic pop thrill. And fuck y’all.

Almost forty minutes later, it’s all over too soon, with Galen’s orchestral-swooshing, beat-walloping version of The Rocks’ We Got It. “Are you there? /Pick up the phone!” James shrieks, as ferocious as when Toya loses it in Jubilee. “Never going to leave you alone!”

That’s fine by me. Angular’s brood are exactly the sort of nutters you should WANT stalking you.

How Soon Is Now?