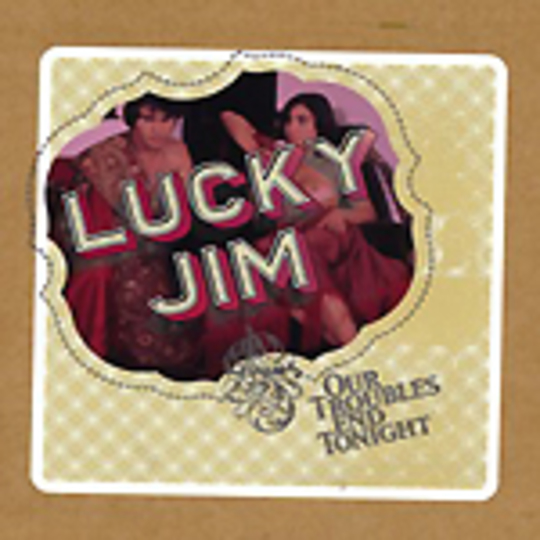 Lucky Jim are Edinburgh-born Gordon Graham, who honed his craft singing on open mic spots in New York’s East Village, and his snowboarding sidekick and Brighton boy Ben Townsend. The duo are signed to Skint Records, but fortunately, ‘Our Troubles End Tonight’ is no Big Beat pig out.

Instead, the duo's debut is a wonderfully warm and inventive record with shades of Air, Nick Drake, Bob Dylan, Serge Gainsbourg, and even – tell your Dad – Neil Diamond. It’s cinematic, portentious and will tug at your heart strings until they break. Really, it’s that good. One cannot fail to be moved by the emphatic ‘You’re Lovely To Me’ nor by the sweeping grandeur of ‘Lesbia’, which despite the dodgy title, could be a sun kissed Verve**.

A boon for the emotionally sensitive is that ‘Our Troubles...’_ has a track for every situation. Deeply in love? Then take a walk through the rain soaked streets of Paris through ‘The Honeymooners’. Just been dumped? Drain a bottle of whiskey to ‘My Soul Is On Fire’. Lost and lonely? Find solace in the welcoming arms of ‘Endless Night’.

It’s almost too good to be true and cynics may dismiss this fine album as mere easy listening but that would be wrong. With ‘Our Troubles End Tonight’_, Lucky Jim** have produced an honest, soulful, and hopelessly romantic record, and it’s one of this year’s best. Put simply, it’s brilliant – buy it.