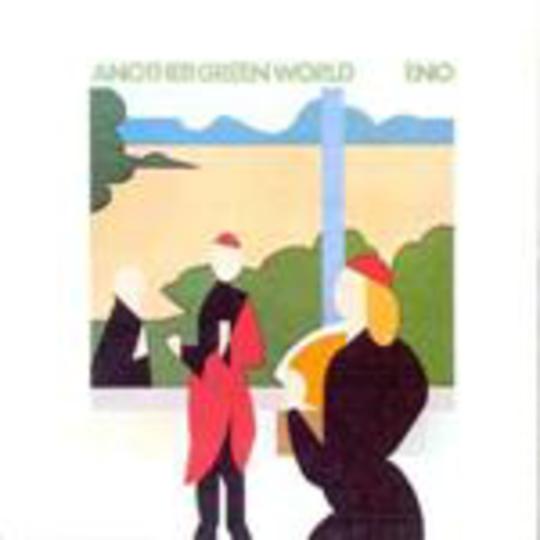 Together with Joe Meek and George Martin, Brian Eno completes the holy trinity of British studio auteurism; a revolutionary vanguard without which the grand history of sonic-pioneering would be severely hobbled.

Eno's flamboyant experiences with Roxy Music and his rich legacy of work with David Bowie, Devo, Talking Heads and *U2* are achievement enough, but dislocated from mega-stars and their rock trappings, it's his solo projects that best map his unique route to pop utopia.

Remastered and reissued here, 'Another Green World' (1975) is routinely judged to be his definitive LP. Conveniently forming a bridge between his rock /pop roots and his ambient bent, it jettisons the glamisms of 'Here Come The Warm Jets' (1973) but holds back from the undiluted and formless progressiveness of 'Music For Airports' (1979).

It's a curious and alluring limbo - a purgatory for everything the seventies wasn't; a square peg for the 'me' generation. Devoid of any recognised style, it's the inherent untrendiness - in any era - that is most striking. It's music in a vacuum, without context, and that's the element that allows it to avoid ever sounding dated. If extra-terrestrials landed tomorrow, they wouldn't have a problem getting their heads around this album.

Opening with the genuinely unnerving buzz-tone guitar of 'Sky Saw', the record is a continual digression; it never loses focus because it doesn't have one to begin with. So whereas pint-sized synth-exploration 'The Big Ship' could sit centrepiece in a Michael Mann thriller, 'Little Fishes' emulates the wooziness of an opium den. Elsewhere you'll find an absurd assortment: woodblock odyssey ('In Dark Trees'), 'Seinfeld' stylee funk-bass ('Over Fire Island'), choppy-organ ballad ('Golden Hours') and futurist folk ('Everything Merges With The Night').

Recalling the Gilbert and Sullivan-isms of early Roxy, 'St. Elmo's Fire' and 'I'll Come Running' are the closest Brian ever gets to a conventional form of 'song'. The former, in particular, is an astonishing injection of pop. Featuring utterly benign vocals and some crazed Robert Fripp frettery, it's Eno at his most playful.

Rejoicing In The Hands