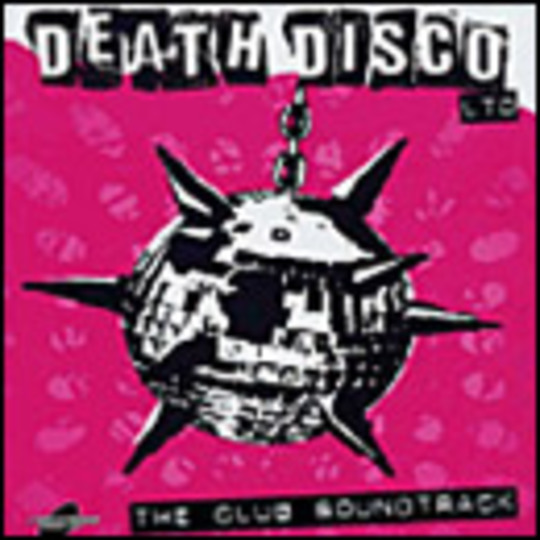 A statement reiterated by fellow DJ Danny Watson and confirmed by their chosen name for Wednesday night shenanigins at Notting Hill Arts Club. So from the depths of the club, comes their chosen ‘soundtrack’. ‘Death Disco Ltd’ contains twenty tracks of punk/post-punk stylings, reggae tickles and something or other by The Glitterati.

Taken from The Modern Lovers' eponymously-titled debut, ‘Roadrunner’ opens proceedings. Despite it being thirty-three years since its initially muted release, Jonathan Richman’s static drawl and the punky chordal guitar lines sound fresh and exciting – fitting into today’s climate with an ease not possible during the histrionic guitar-infested year of its release. Covered by The ‘Pistols in their earliest days, the recording that can be found in Julian Temple’s ‘The Filth and The Fury’ shows a laconic Johnny Rotten turning from a spittoon searching spasmo into his best Jonathan Richmond impression, complete with deep vocal tones. It is a testament to The ‘Lovers continued influence and a classic beginning to any compilation.

From 1971 to 2002 then and The Libertines’ ‘Up the Bracket’. A band you no doubt already have an opinion on, but for what it’s worth, I recently really started to ‘get’ this band, and ‘Up the Bracket’s’ crashing melody is a great example of Pete n’ Carl at their best. It’s also a tune that sits very comfortably between The Modern Lovers and The Undertones, who get a nod with the uplifting ‘It’s Gonna Happen’. With the distortion pedal stamped off for a while, The Kinks ‘Victoria’ comes bounding in with its simple progressions and Rickenbacker trills. The oldest release on the record – originally put out in early 1967 - it’s interesting to hear the noticeable links and similarities with other tracks, with the aforementioned ’Roadrunner’ being a clear example of influence and development.

It is worth noting that although punk forms the inherent link running throughout ‘Death Disco ltd’, we are given a far wider range of material to digest. Hip hop’s mainstream introduction comes in the form of the forever joyous ‘Rapper’s Delight'. Sugarhill Gang showing how Chic’s _‘Good Times’ can be side-swiped into a catalyst for change and excitement. After the destruction that naturally occurs during Motorhead’s 'Ace of Spades', our attention is turned to The Island. Bob Marley's ‘Trenchtown Rock’ – although not a patch on the live version taken from his 1975 Forum show – is a welcome and particularly fitting break from the preceding three-chord mayhem. With madman Lee Perry’s ‘Kill them All’, taking punk’s uncompromising attitude in its title and layering it with sparse dub beats, reggae’s relationship with punk and the mutual respect shown between their fans is clearly evident. Back to the guitars then…

…well almost. A few pit-stops first, taking in the horns and soul of Chairmen of the Board’s ‘Give Me just a little More Time’, the funky vibes of Freda Payne, and The Rubinoos poppy cover of Tommy James and The Shondells’ ‘I Think We’re Alone Now’. They are all great songs in their own right and surprising inclusions on an already warming and eclectic compilation. Unfortunately, the choices are not flawless. The great New York Dolls' live version of ‘Personality Crisis’ appears as a lumbering mess, losing any verve and abandon amongst its plain grumbles. X-ray Spex’s ‘Warriors in Woolworths’ also seems dated and weak. However, in a selection of twenty songs, they are minor distractions. With The Pogues raucous ‘Fiesta’ thrown in for good measure at the close, _‘Death Disco Ltd’s’ job is done. On a final note, sitting in the middle of all the punk, soul, reggae are the glorious Small Faces. ’Tin Solidier’s sublime organ warbles and Steve Marriott’s quivering vocals are a psychedelic carnival of melody and cacophony – the production sounds fantastic and the song deserves its place on this very satisfying and surprisingly mixed record.