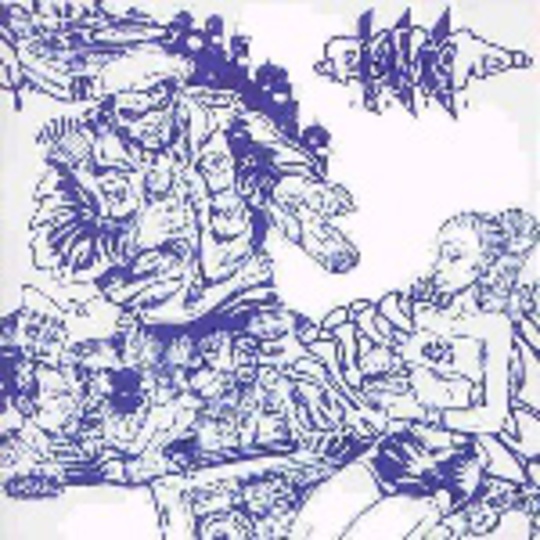 Great. So you’ve got the latest Muse record, air guitared to The Darkness, even politely moshed to Franz Ferdinand a few times. That’s brilliant, good for you. How is life in suburban ‘hell’? This stuff don’t mean shit to the real dropouts and squat kids, braids matted into thick messes of uncared trophies to life. All they wanna do is get off their tits and dance like gibbons without balance.

Slowly, across tiny pockets of dissonance countrywide, a new mutated sound is rearing its toxic head. A nasty great melting pot brewing pure uranium-infected crossbreeds of drum & bass, lunatic dancehall and hedonistic techno abandon. Spearheading the multi-faced bastard results over here are the likes of UK rave-stirrers The Bug and Shitmat. Now Detroit’s in on the act too.

Finally making it onto the format where it belongs – that’s 12”, doubters – it’s about time that Soundmurderer + SK-1’s immense compilation of collected EP and single tracks got the credit it deserves. So it will.

Drum & bass was always about the anthems; the recognisable adrenaline head-rushes of pure nihilistic low-end that meant the same thing to devotees all over: dance, and dance now. Time for an update, Todd and Tadd fashion. That’s Rewind founder Todd ‘Soundmurderer’ Osborn, aka the owner of his hometown’s first d‘n’b record store, and Tadd ‘SK-1’ Mullinx, aka weird hip-hopper Dabrye.

The genre’s curse is neatly sidestepped with ease before we’re barely in motion: there’s little samey snare and bass wallop tedium to bore – each drum sound and every rattling frequency is stretched and twanged to make ‘Rewind Records’ an LP that’s just as effective in a club as on your stereo. Crucially – and this is where so many other contemporaries fail – every time it appears that some tossy reggae vibe might be about to undo the good work, in lunges a last gasp drum snap or, as on ‘Tel’embodanustyle’, near Boards Of Canada swirls. Over 70 minutes with barely a second wasted is as telling an endorsement as any.

‘Call Da Police’ comes on like a nasty accident at the end of a euphoric night out (maybe that’s why the plea for the filth is put out repeatedly during the ’flu-catchy refrain), but it’s dwarfed by the unbelievably grimy bass of ‘Lock It Off’, the percussive assault midway through ‘Dreader Than Dread’, and the entirety of ‘Fathom’, which is rudest electronica lost in a particularly cataclysmic jungle.

Enough analysis, for this isn’t a record that should be dissected geek-stylee. Two commands: buy, dance. Amen.