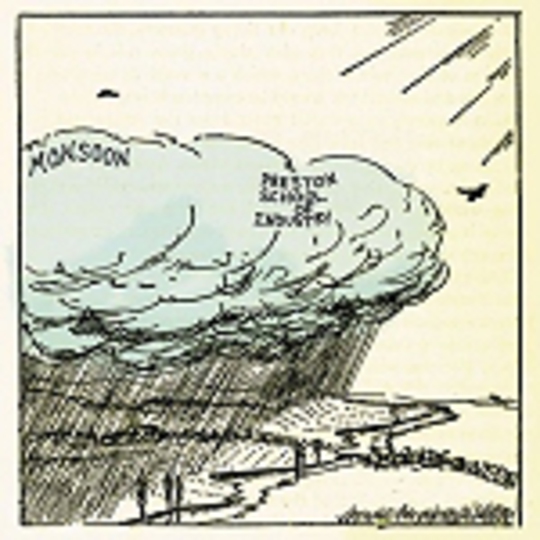 For the uninitiated, this is the supergroup (sorta) of an ex-Pavement bloke, Wilco (all of them) and Minus 5’s Scott McCaughey. This is also their second album, and a great improvement on the first. Preston School Of Industry, lead by Scott Kannberg (aka Spiral Stairs) have released an album of simple, wistful indie pop and country rock.

While the term ‘alt.country’ still sends some kids running as far as their fat legs can take them, The Lemonheads always did rather well with this particular sub genre, and parts of ‘Monsoon’ echo those hazy times of Evan Dando’s smoochie tales (‘Caught in The Rain’) as much as they do Pavement’s skewed riffs and off-note vocals (‘Line It Up’).

It’s not as focussed as it could’ve been, considering the freshness of the songs (they were written entirely as-new; compared to debut ‘All This Sounds Gas’, which was made up party of ideas he had whilst in Pavement). ‘Get Your Crayons Out!’ starts as a promisingly jingly jangly affair but doesn’t build on it, eventually fading out and falling apart. Bah. Likewise, last track ‘Tone It Down’ sounds like it should be going somewhere, but never does, despite a little mandolin to help it along the way.

The highlight is undoubtedly ‘Walk Of A Gurl’, with a cheeky descending guitar line, some tasty harmonica, and just that whole lazy afternoon vibe to it. And a rubbish solo. You might get sent this on a mix tape one day.

Kannberg says it’s his personal, political album, “the kind of depressed world we live in now days post 9/11.” It could be seen as his therapeutic way of letting it all out, but there is no immediately obvious affected angst on ‘Monsoon’. It’s all a bit, well, deceivingly happy. ‘Her Estuary Twang’, for example, has some “ba ba ba’s” and lyrics about monkeys (on his back, natch).

The Dawn Parade at The Portland Arms, Rochester, Sun 22 Feb