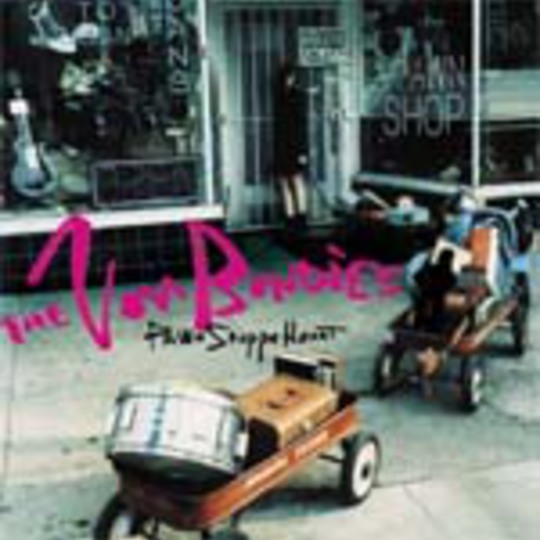 You’d think even the most pacifistic of us would raise a fist to Jack White’s pasty chops if he sucker-punched you in a club. Not Jason Stollsteimer. You see, while the head Von Bondie was having his face beaten to a pulp, he was simply waiting for this moment to deliver his sweet revenge.

Hands down,_ ‘Pawn Shoppe Heart’_ is the record to blow their contemporaries out of the water. The Von Bondies will always be the underdog; the Mudhoney to The White Stripes’ Nirvana and The Strokes’ Pearl Jam, yet like their ‘90s contemporaries, they have the upper hand in terms of pure vigour and excitement. They also have the best singer – unlike White’s thin bluesy whine, Stollsteimer’s full-throated howl doesn’t grate over a whole album – and, with bassist Carrie Smith and guitarist Marcie Bolen, a wonderfully demented chemistry is realised.

There’s something distinctly feminine about the record. Even drummer Don Blum plays like a girl, with a primal, driving sense of rhythm that occasionally calls to mind Babes In Toyland’s Lori Barbero.

Musically it’s a leap forward from their debut, ‘Lack Of Communication’. Purists may bemoan the use of an actual producer and recording studio, and sure, the record is a tad sheeny. But what the fuck, the songs are hyper-concise and never less than explosive. The opening gambit is particularly riotous. ‘No Regrets’ and ‘Broken Man’ are speaker-shredding rock’n’roll masterpieces, while the classic pop stomp of ‘C’mon C’mon’ is easily the single of the year so far.

Things slow down somewhat thereafter. The long snake moan of ‘Mairead’ – an ode to the Queen Of Noize – comes over as particularly poignant (“Oh Mairead, your love is beyond compare… Tell me is this the end?”). Meanwhile, the Soledad Brothers baiting ‘Been Swank’ is pure venom (“I’ve been set up like the innocent/I’ve been Swank and loving it!”) and the Smith-led ‘Not That Social’ expertly adds momentum where the casual listener would tune out.

So we’re not talking Number One albums here, and perhaps that will upset the ambitions of young Stollsteimer. But he needn’t worry – ‘Pawn Shoppe Heart’ exists in its own creative arena above such chart fodder and long may its impression remain intact.