A Crow Left Of The Murder 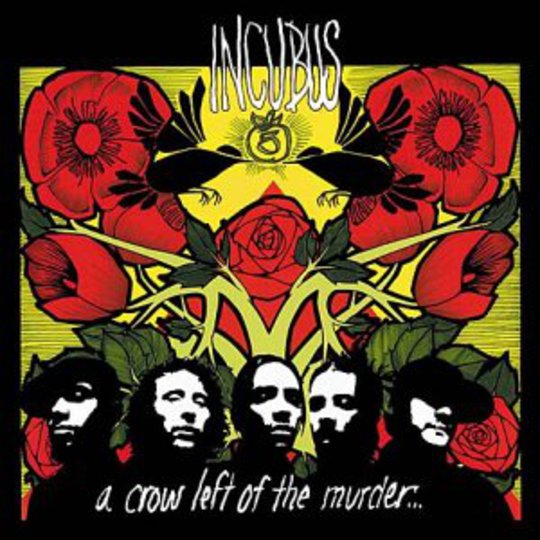 Gifted enough to retain their youthful buoyancy, yet mature enough to avoid stagnation, Incubus have seemingly always been seated on at least one fence at every point in their career. They have straddled every musical genre – metal, rock, pop, funk, punk, emo, whatever – but have consistently succeeded and triumphed in whatever they set out to do.

I saw them back in the mid-nineties when they first entered Britain on the back of the Korn “Life Is Peachy” tour, when they were but talented teens experimenting with Primus and Chili Peppers odds and ends; I’ve been a keen follower ever since, as a stern believer that they’ve transcended their peers by offering an optimistic but rocking alternative to the mainstream metal pity-wallowers of the last decade.

But how can a band who preaches unity, joy, spiritual awareness and mirth survive integrity-destroying acts like kicking out their friend/bass-player/founding member Dirk Lance or trying to sue Sony? OK, Incubus has always been a pretty commercial outfit aspiring to be internationally enormous, and it’s never bothered me. I’ve dealt with the dream-hunk photo shoots and catwalk videos. Jealousy is not a valid foundation for dislike. But for me, kicking out Dirk means they’ve potentially sacrificed a lot of their kudos. Have the ethics of Incubus been forsaken?

'A Crow Left Of The Murder' is a fucking massive landmark for the band. There’s a lot riding on it. They’re all set up for a fall. But the album is good. And here’s why:

'Morning View' was as pop-metal as could be achieved without slipping onto the business-end of being cheesy. Rather than just continue the formula down the line, Incubus have morphed and progressed. This album is a real departure, a real leap from the old days. Although it may sit uneasily at first, the heavy guitars are pretty much gone – and this is a fucking great move. Replacing the RAWK-ness is an earthy, twangy, garage rock sound. This gives the band a lot more space and a beautiful organic quality. There’s a lot of surf-pop energy to it, which has not been adequately captured before.

This album will make you dance. Songs like 'Pistola' and 'A Crow Left Of The Murder' have the big pop appeal of Blondie crossed with the rocking energy of Rival Schools. It’s endearing – a magical superpop band with those heart-wrenching choruses you love, and the fast-paced uplift of a great underground rock band that only you and your bestest friends know about. That’s something really special. Smiles, tears and laughter guaranteed.

Brandon Boyd's a little more outspoken these days, much to his credit. In a typically spiritual/Utopian/downright hippyish camouflage, there are even inklings of a political edge to songs like 'Made For A TV Movie', as Brandon ushers forth ideas concerning the ridiculousness of blowing people up as if the war was just a movie. Ever thought-provoking and intellectually stimulating, it seems, conjuring up memories of that day when we all woke up to the sound of “Ladies and gentlemen… uh… we got him!” etc. Undercover mockery of the American president by an American? And I thought there was no political left out there.

The rhythms, the bubbling, they sit so tight. This album is electric, and in an uncomfortable way, stunning. Brandon’s voice soars, the melodies now more obscure and daring, while Chris Kilmore and Mike Einziger provide a wholly unique sample/guitar combination, totally individual to Incubus, and exhilarating too. The loss of Dirk Lance is noticeable, but in no way does it detract from the album. Gone are the playschool drum n bass thrusts of Incubus’ formative years, and in are exciting rock grooves and dance-thumps. There is a new Incubus, surpassing expectation, breaking hearts, rocking hard, very much alive.