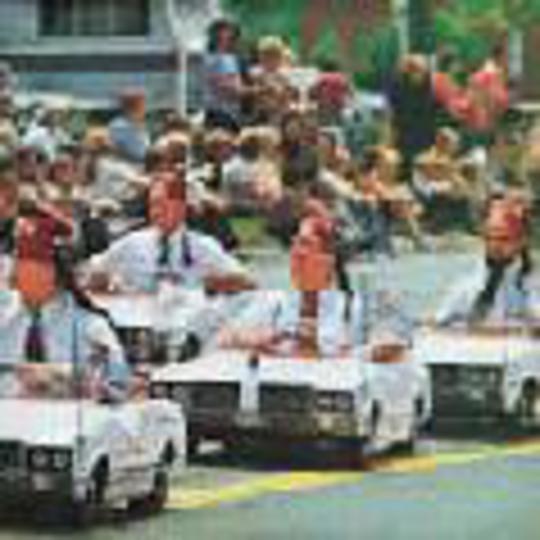 Probably one the first genuinely exciting punk bands to arise out of the post-punk, post-Sex Pistols *explosion the *Dead Kennedys were a positively inspirational force when they emerged in 1979 with the ‘California Über Alles’ 7”. Through their political insurgence and maniacal live performances the band was a catalyst for a burgeoning underground punk scene in the early ‘80s, inspiring many to speak their mind and speak it out loud. Even the name ‘Dead Kennedys’ was shocking enough to have them banned in most cities. And those that did allow them to play soon reconsidered after speaking to their vocalist Jello Biafra; named ‘Jello’, after America’s favourite dessert, and ‘Biafra’ after the African region noted for civil war and famine.

So, resurrecting a time when punk rock was still dangerous and politically minded, and coinciding with their 25th Anniversary (re-issued last year but only sent for review a few weeks ago) *Manifesto *have re-released, re-mastered and re-booted a bunch of their albums, of which we have the following for review.

By the time the _‘In God We Trust’ _12”EP was released in late ‘81 the Dead Kennedys were making serious waves in the U.K., thanks to the success of _‘California Über Alles’ _and _‘Holiday In Cambodia’ _off their ‘Fresh Fruit For Rotting Vegetables’ _album. However, distribution problems in the states meant that many punks’ first exposure to the DKs was their intense live shows and Jello’s outlandish stage performances. Few stage-dived before Jello Biafra and many consider him to be the first crowd-surfer – that was how eye opening it all was back then!

Bursting open the EP with the manic ‘Religious Vomit’, like the *Bad Brains *on speed the DKs hurl forth a barrage of barely decipherable lyrics all spat with a nervous furore. It was a furious thrashy rampage, raw as hell and inflamed with a righteous indignation. The false start into ‘Dog Bite’, stopped with the words “hold it, that’s too slow” before the adrenalised charge back into its 70 seconds of shaky comedy punk chaos says it all. Of course, ‘Nazi Punks Fuck Off’ _ still sounds as raw and bloody as ever, urging the true spirit of punk onto the parasite chic of the fashion punk masses.

On the same disc is their second album ‘Plastic Surgery Disasters’, released soon after in 1982, that hones their fidgety choruses down to crazy slam-dancing perfection. It has to be said that one of the most distinguishable things about the DKs was guitarist East Bay Ray’s strangely enigmatic guitar riffs, helped in no small part by his pre-DKs rockabilly band Cruisin, a track like ‘Terminal Preppie’ _subsequently sounding like _“fucked up circus music at 78rpm” _(according to Steven Blush in his 2001 book _‘American Hardcore’) as it races by like an out of control Wacky Races car down a rocky cliff-face. Awesome.

However it was this 1985 release that really brought the DKs notoriety, or more specifically the sexually explicit *H.R. Giger *painting ‘Landscape No. XX’, included with the LP, which came to the attention of the LA police dept after a concerned mother found it in her teenage daughter’s room. The subsequent court case was significant in that had the DKs given up the fight for the inclusion of the artwork all kinds of censorship implications would have arisen. As it happens the case was thrown out of court but the experience had taken it’s toll on the band and they split up soon after the release of _‘Bedtime For Democracy’ _(although the band later reformed with Brandon Cruz of *Dr Know *on vocals).

Arguably their best release ‘Frankenchrist’ _opens with _‘Soup Is Good Food’, with its creepy surf-guitar noodlings, restrained by Biafra’s crazy bug-eyed melodies. Next to the Buzzcocks, the Dead Kennedys were one of the first to introduce a real sense of melody to punk rock; albeit crazed, slightly eccentric melodies with more vibrato than a geriatric on a rollarcoaster ride.

But it was those shout-out-loud choruses that made it such a compelling release and which were so unique to the DKs’ sound, Biafra somehow communicating the terrifying, transgressive prospects of globalisation (‘Hellnation’) and money-hungry governments (‘Stars And Stripes of Corruption’) through eerily catchy choruses, drilling his seditious lyricism into your head in a way that’s just hard to ignore.

And as for ‘MTV Get Off The Air’, well, it is just as relevant today as it was back then, the band replicating some kind of ‘wacky’ Buggles-type music while Jello imitates some patronising DJ: _“Hi, I’m your video DJ / I always talk like I’m wigged out on Quaaludes / My job is to destroy what’s left of your imagination / By feeding you endless does of sugar-coated mindless garbage,” _before they bound back into its fierce, scowling protest chorus.

Yep, the Dead Kennedys were one huge middle finger alright, their subversive stance helping to define hardcore and punk as it was always meant to be. Those of you who think you know what punk’s about could do well to check these re-issues out. It’d sure make a difference to those faux-punk, pseudo-rebellious, sub-Green Day, Boy Meets Girl Hits Car Wets Pants acts currently festering in the quagmire of banality that is emo-punk.

Music for the Scrapyard Dancehalls