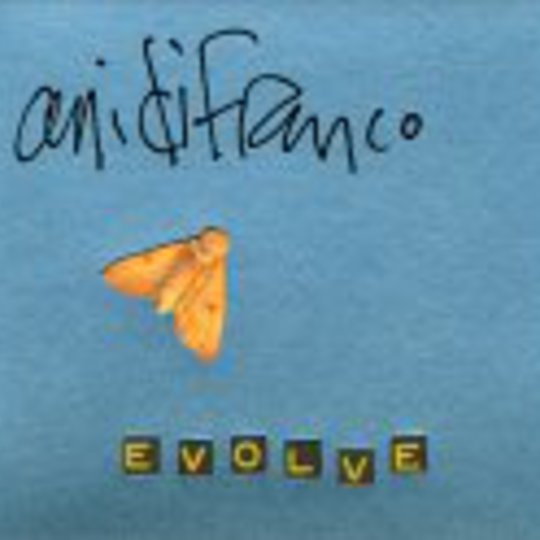 For those of you who have never heard of her, Ani is a 'contemporary urban folk' singer songwriter who broke all confines of her genre when she went on a huge US tour with Tori Amos and Alanis Morissette while at the same time losing fans left, right and centre for numerous reasons including her sexuality (covered on many other websites). Yet however turbulent her career may be, one thing can always be said for Ms. DiFranco; no matter what is going on in her life, her music is always of the highest calibre. 11 years and 15 albums on, this latest release is no different.

Considering how her life has been over the past few years, entitling her album 'Evolve' is about as accurate as any album title could be. Opening track 'Promised Land' is Ani Mk II. Put to the side are explosive yet gentle songs from past albums such 'Out Of Range' and in comes the mellow jazz-tinged DiFranco. As the lady herself says, 'What's with this new version of who you are?' (something which her 'fans' have questioned on numerous occasions), but this seems to sit so well with her vocals. But then, has she ever done anything that has just flatly not worked? Not to my knowledge.

So how do we follow that up? With some damn funk, that's how - in the form of 'In The Way', which has the lyrical heart of a blues song with a funky bassline that any 70's cop show would have killed for. And so the album progresses, from track to track with each being different from the last, repetition seemingly not being in the new Ani's vocabulary.

The stand-out track is the title track of the album which opens with a guitar riff that could have been lifted from the Presidents Of The United States Of America. 'Boll Wevil' is just Ani strumming on her guitar and singing, full of passion and as bittersweet as a sour apple!

So, after all this time is she still worth the time of day? Without a shadow of a doubt. With her own well respected label (the US home for Hamell On Trial among others) many may wonder why she continues. The reason is simple: she still has a lot to say. And until people start to listen, she will keep singing and I, as well as many others, are very glad to keep listening.