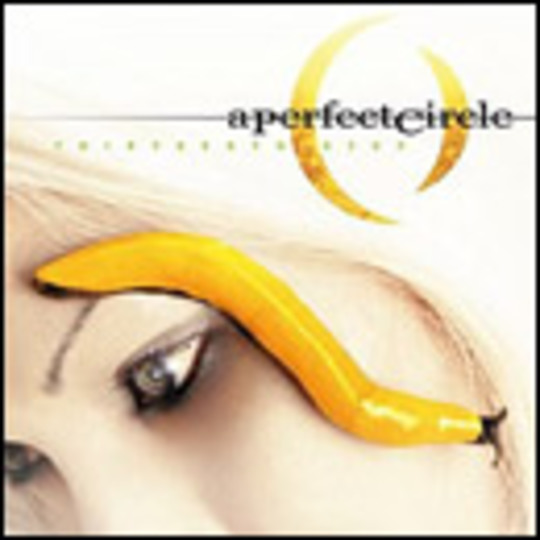 Despite having lost two members from their original line up, quality of musicianship isn’t an issue on A Perfect Circle’s second outing. It must be great having a Rolodex like Billy Howerdel’s.

While retaining the services of drumming god Josh Freese, and Tool’s singer, Maynard James Keenan, APC managed to bag the Smashing Pumpkin’s former axeman, James Iha, and Marilyn Manson’s bassist, Jeordie (Twiggy Ramirez) White after losing Troy Van Leeuwen and Paz Lenchantin at those positions respectively. What you have with APCv2 is the makings of a supergroup, but can these guys play together?

Thirteenth Step is better than APC’s debut Mer De Noms thanks to a couple of changes. The sound is crisper, the band sounds tighter; and White’s bass is more of a driving force than Lenchantin’s ever was; he’s the engine room on several tracks, particularly 'The Package ' and 'Pet'. However, fans of the first album will be glad to know APC have also managed to keep what worked the last time – Howerdel’s ear for haunting melodies is still as strong as ever, and because of this, Keenan gets to showcase his amazing voice throughout the album.

APC’s sound is hard to pin down. Howerdel started this band several years ago after working as a guitar technician for everyone from Tool to The Smashing Pumpkins to Nine Inch Nails. While you couldn’t call APC’s music metal or industrial, it matches the dark tone of all of the aforementioned bands. Perhaps the biggest influence on the song writing is Tool, and their willingness to chuck out conventional song structure altogether in favour of something more original.

'The Package', for example, opens the album with gently picked guitars over a striding bass and caressing drumbeats lulling you into a false sense of security for four minutes. Then a metal riff comes crashing in like an anvil, and the song rips into overdrive. 'Vanishing' begins with chanting over marching drums and then sidles into a hypnotic guitar line with shimmering repetitive vocals pressed way into the back of the mix.

While originality is certainly something to strive for, it can also backfire horribly – as is the case with 'The Nurse Who Loved Me'. It’s a good enough tune, but it feels pretty lifeless, and out of place with what’s gone before. It also isn’t a patch on the version APC deliver live. Another low point is 'A Stranger', which loses its way around halfway through, as first echoes pour in, and then Keenan uses a languid moan to deliver lyrics that are absolute howlers “Shy away/Shy away, phantom/Run away, terrified child”.

However, when this band’s on, they serve up enough intensity to level an entire city block. 'Weak And Powerless' and 'Blue' build up powerful heads of steam, but have the sense to let things down lightly rather than cheapen what’s gone before with guitar hysterics. On 'Pet' (the scathing indictment of the White House’s present incumbent that BRMC’s 'US Government' should have been) Keenan whispers over a gentle riff and drum caresses, and then fights for air as a spiked guitar line cuts its way into the twin rockslides of Freese’s drumming and White’s pummelling stop-and-start bassline – best line: “swaying to the rhythm of the new world order and/Count the bodies like sheep to the rhythm of the war drums.”

Thanks to the calibre of the line-up’s musicianship, and Keenan’s ability to write lyrics that don’t insult the intelligence of his audience, the gems on Thirteenth Step outnumber the filler. It probably doesn't have the singles required to crack the mainstream, but that's never been the point with APC. Hit or miss, this is some of the most engaging, and unconventional music you’ll hear from a major label band this year.