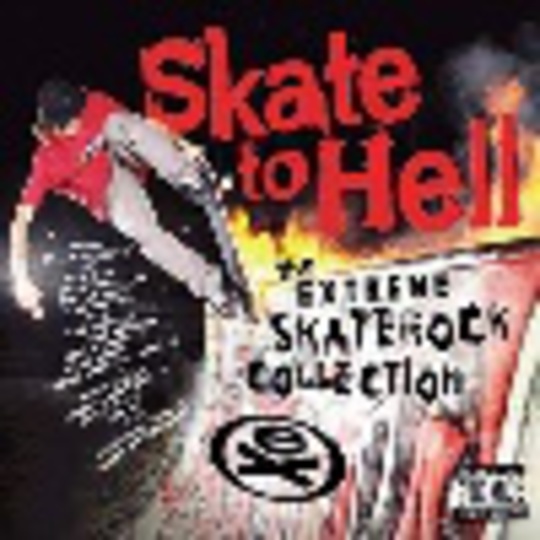 As some child-assed rat-faced lil’ minx once noted, “he was a sk8er boi/she said see you later boi”. Erm, yeah. Unwittingly, Ms Lavigne concisely summed up the vacuity that has enveloped the skateboard massive post nu-metal.

For those living in Outer Mongolia, nowadays a skateboard no longer has to be actually used – get with the 21st Century granddad – it’s an accessory; the metal kids’ teen willy extension to the scallies’ gratuitous gold chains.

So what of a compilation which claims to represent ‘extreme skaterock’, with added help from certain bands included, you suspect, for kudos-gaining purposes rather through any real life associations to breakneck tricks on a wheeled plank?

As suggested, the results are mixed. Between untouchable greats of the past flounder over-rated ‘stars’ of 2003 (subtle product placement, like, rules), peppered with a few more bearable established names and the occasional surprise. And while it’s commendable to include the likes of Motorhead, Public Enemy & Anthrax and the Dead Kennedys, sandwiching dull indiesters Black Rebel Motorcycle Club and average unit-shifting screamers Funeral For A Friend in between is frankly a little insulting.

Prizes for greatest skate connections? Well, Mike V And The Rats, who include professional skateboarder Mike Vallely in their ranks, are not only the most qualified here, but also prove a welcome old skool punk discovery. Beyond that, Motorhead’s signature tune ‘Ace Of Spades’ conversely has an eternal association via inclusion on the Tony Hawk PlayStation games, and the stereotypical skatepunk of Millencolin, Fenix TX and Rancid (include cunting OPM too if you must) at least has some relevance.

The few real anomalies – the Prodigy? Black Sabbath? – don’t detract too much from what you should be listening to on ‘Skate To Hell’, however. The Dead Kennedys’ ‘Holiday In Cambodia’ (complete with Jello Biafra’s timeless wide-eyed anarchy) and the MC5’s arse-walloping ‘Kick Out The Jams’ both still sound immense.

Other, quite random, highlights come via Violent Delight, (Hed) Planet Earth, ‘A’ and The D4, but the world would be an infinitely finer place if P.O.D. (damn Christians), Bowling For Soup (diet? anyone?) and Less Than Jake (horrific fatal diseases always happen to the wrong people) split tomorrow.

No matter. Should be a perfect time to stop hanging round outside Boots with your fibreglass cockpanel and actually fucking use it for purposes other than becoming a parody of yourselves, hey kids?