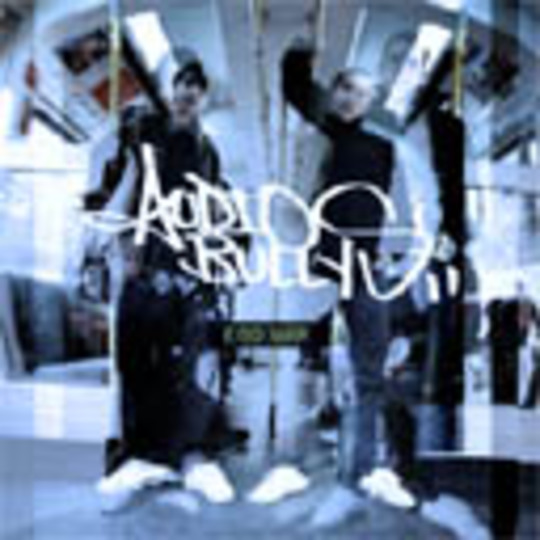 And so, it turns out that you can’t seem to find the time, let alone the energy, to go clubbing night after night anymore, what with trying to find a babysitter as well. And who can find the money these days? Somehow a quiet night in, chilling with the missus and a take-away in front of Stars In Their Eyes doesn’t sound so bad...

Yes, even ravers grow old. There comes a time when geezers don’t need any more excitement. But as the ‘E-generation’ (still flushed with memories of illicit warehouse raves and yellow smiley-faces saying ‘Aciiied’ and buzzing, busy Ibiza before Radio 1 and its re-vamped fucking roadshow got in on the act) begin to take their foot off the accelerator what is there, other than those acid house and hardcore nostalgia compilations that are creeping out, that they could listen to that’s going to sound relevant to their lives?

Well, aside from last year’s ’Vunerabilia’ album - a graceful, vast, Cinemascopic epic by the two ex-clubbing Mancs who make up My Computer - it sounds as if ’Ego War’, the much talked-about debut album from hooli-house merchants Audio Bullys, would fit the bill surprisingly nicely.

Simon Franks and Tom Dinsdale take great pains to point out how their influences stem from The Specials and Happy Mondays and such like, perhaps partially in hope that reviewers will just lazily cut’n’paste and think no more of it. And, by and large, it’s worked, but though old ravers are going to greeted with an impressive mélange of familiar and welcome sounds sluicing about within the album - a shag of baggy, pieces of early Prodigy, echoes of techno and I’d be surprised if the boys don’t have a well-played copy of ’Complete Madness’ in their collection - I have to tell you that the resultant work has, essentially, ended up sounding like East 17 had they had only ever listened to Flowered Up and early '90s house white labels. That’s not to denigrate them (well, obviously) but the Specials references are somewhat off the mark. Nice try though, lads.

What else? Well, they’re straight outta Richmond, Surry, they’re dropping their aitches an’ fings and going on about the hollowness at the centre of their lives as they spray their tags on the trains that would (otherwise/soon) take them from the leafy soporific stillness of suburbia to the edgy, alluring airlessness of the metropolis - the place where they want to belong, be from, be in. But aren’t.

So, Simon and Tom, like Jagger and Strummer before them, act rough, talk tough, blast forth their raggedy beats and, with an uncompromising and brutal eloquence, tell us just How It Is in the Real World in order to shake us out of our bourgeois complacency. This is an EGO WAR and they ain‘t not takin‘ no prisoners or nuffink “get my fackin‘ money or you get my fackin‘ fist”. Gertcha!

Such nice boys really. But the shrewdest minds know that persona and appearance are essential to how the music is going to be perceived; from the ‘we’re-just-ordinary-blokes-us’ shtick that comes from the likes of the Stereophonics and all to the camp theatricality of Fischerspooner, pop music is about carefully constructing an image and playing the role: namely the person you actually want to be rather than the invisible anybody that you were born being. It’s not exactly that you have to fake it to make it but Simon and Tom, just like the young stage-school brat Michael and Joseph the diplomat’s son, have realised that they have to ring a few changes before stepping into the limelight (this is no more of a con-trick than modifying your behaviour to suit different situations whether it be asking your boss for a raise or telling your mates in the pub what a wanker your boss is. Neither/both are ‘real’/‘fake‘).

And so here they are as piranha-eyed street geezers, with a swagger. Their mums wouldn't even recognise 'em. Bless.

The effect of London’s queasy gravitational pull is evident on ‘Ego War’ and the Audio Bullys, like fellow enraptured outsiders such as Blur, Saint Etienne and The Streets (damn, I mentioned them) amongst others, sound more overtly ‘London’ then any true indigenous band could. They are even pictured on the cover of the album riding the tube, which is a dead giveaway. They might just as well be posing outside Buck house or standing in Trafalgar Square with pigeons on their heads for all that the image implies: ‘look at us! We’re in London! We’re part of this now’. And their mode of transport is also significant; double-deckers are for duffel-coated indie types, black cabs aren’t street enough, but the Underground fits just right: dark, dirty, noisy, busy, urban, enclosed. Which is as good a description of the music as any.

The music: cheap n’ nasty house tunes cut with any old free floating musical detritus - woops, whistles, old TV show samples... anything that they can lay their hands on to thicken the sound. This rough-textured aural nutty slack works best when it isn’t being smoothed out and smoothed over with too many lyrics - which are, by and large, bloody awful - and is left coarse.

The harsh, rasping ‘Real Life’ is a good example of Audio Bullys at their most immediate; a pummelling, polluted house track best played at colossal volume in sweltering, packed-to-the-rafters clubs. Then there’s the fucking hilarious, mentalist, ‘ardkore anthem ‘We Don’t Care’ sounding like a post-rave Sham 69, all terrace yob vocals and sledgehammer subtle beats, which, for all its affected lairyness, can’t help but be a quaint, quintessentially English pop song. Sorry guys - or congratulations, I should say - it’s the ‘Hurry Up Harry’ for the new millennium.

‘The Tyson Shuffle‘ rattles along niftily under a Scooby Doo haunted fairground wail and ‘Hit The Ceiling’ sounds like the ravers equivalent of a ‘Nam flashback: indelible images of hands waving in the strobe light from a time when it felt like there was no tomorrow, like there was no today, “keep it up now, keep on dreaming”. Now it’s all a dream away.

Then there’s ‘The Snow’: ridiculously infectious, planet-sized pop, all huge disco horns and an involuntary body movement inducing bouncing beat. This is as essential in your summer party mix-tape/CD/etc as ’Move Your Feet’, ‘No Good Advice’, ‘Don’t Wanna Lose This Feeling’, ’Boys Of Summer’ and Tomcraft’s ‘Loneliness’. Yes, it really is that monumentally fantastic, and the bit where everything halts for a sample from The Six Million Dollar Man theme tune to drop in is cold, bastard GENIUS.

Overall though the album is none-too furious, which is something that belies their street-tuff image but is just enough to send dance veterans shuffling ‘round their kitchens or soundtracking Sunday barbecues when old friends converge and chat shit about the old days and maybe frug around the garden and award themselves Brownie points for spotting the sample from Costello’s ‘(I Don’t Want To Go To) Chelsea’ during ‘Way Too Long’. It‘s recognisable music for those who still want to feel like they‘re ‘in touch‘ with what‘s ‘going down‘ today.

“Drinks and friends by the river Thames.../ I wanna stay here for the rest of my days”. It’s all very civilised really.