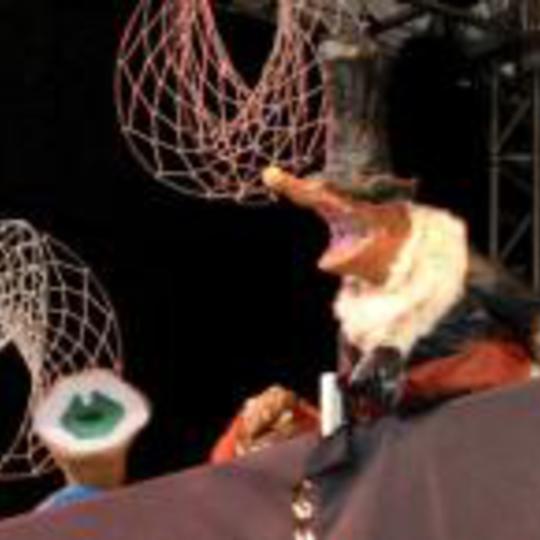 You may have heard of them, you may not have. You may think you know them, you probably won’t.


Mr Maloke is a mole, and he left his home of Crooklyn to move to Berlin to form the congress of puppetry. Why did Mr Maloke leave Crooklyn though? Did he mean to start a new musical career in Berlin? Maybe he did, maybe he retired and re-invented himself. Whilst in Berlin, Mr Maloke bumped into a couple of puppet frogs, a puppet rhino, and plenty of ideas. This meeting helped form the world's first puppet hip-hop collective, Puppetmastaz.

After two limited EPs, we have the puppet’s first album proper. 'Creature Funk', is an electro-hip hop masterpiece. We live in a time where hip-hop is allegedly at its highest point, yet all you hear is watered down cliché ridden pop (step up 50 cent). The Puppetmastaz are just the stars we need. For the 60-odd minutes of 'Creature Funk' (believe me, they ARE odd minutes) you can hear love songs to bumblebees, how "humans get all the credit", and some fantastically-spectacular animalistic tales from the city of the puppets. Musically, it is BOMBastic. It’s fuelled by Nitro-glycerine, even THE one and only BECK *couldn’t make tunes this funky, even in his heyday. Think *Timberland meets EC8OR, and you’re nearly there. Cut-up beats, manic pace, and funky, fresh lyricism.

You may have trouble finding this record, but check out the website. True underground material is always hard to find, always mysterious. Half of the fun is finding it before a mountain is made of a molehill.

Katastrophy Wife at Jug of Ale, Birmingham, Mon 26 May