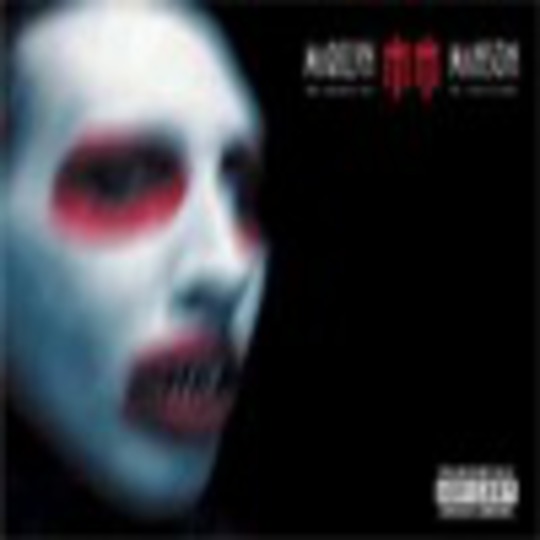 Dig out the Max Factor and get all your ghoulfriends together, the tingliest wart on the face of America is back to SHOCK you and ROCK you like it's 1935.

That's right, folks, Marilyn Manson's ditched his 'Rhyming Dictionary For Church-Bashers' and sought refuge in Hitler's Berlin for what he likes to call 'The Golden Age Of Grotesque'.

With all the BUZZ-BUZZ on his Web site, you would be forgiven for thinking ol' Spooky Eyes' latest record would be an audio-visual shrine to those Jew-burning bastards; all marching militia, Swastikas and 'Mein Kampf' quotes. Fortunately, like Hitler, he seems to be lacking in the bollocks department... either that or, as the tunes suggest, his time machine got stuck in the glitter and glam '70s for longer than he would've liked.

Replacing long-time collaborator Twiggy Ramirez with Industrial twiddler Tim Skold (of * KMFDM* infamy) and giving now-firmly-installed guitarist * John 5* a chance to shine, the sound of Marilyn Manson 2003 still piles on equal helpings of Marc Bolan and Trent Reznor, but gone are the scabs, rust and faeces that gave 'Antichrist Superstar' its charm.

Opening track proper (after instrumental 'Thaeter') is, appropriately, 'This Is The New Shit' - an oddly dance-able industrial stomp. The first line: "Everything has been said before, there's nothing left to say anymore, when it's all the same you can ask for it by name." Marilyn Manson at his most honest?

From then on in, it gets patchier than the main prop in Winona Ryder flick 'How To Make An American Quilt'....

There's the lead-off single, 'mOBSCENE', sounding like little more than 'Pretty Fly (For A White Guy In Drag)', complete with cheerleaders chanting "Be obscene, baby, not heard!"

There's the expected references to old flame Rose McGowan on 'Spade' ("...and we said till we die") and 'Para-Noir' (contender for album's best moment). The latter opens with a female voice listing her shallow reasons for fucking our favourite sunlight-dodger over spooky industrial that could've been culled from his contributions to the 'Resident Evil' movie, and continues with our man hitting back. There there, Brian....

And there's the now-obligatory track with 'Beautiful People' drums - 'Doll-Digga Buzz-Buzz Ziggety-Zag'. The band at their glammiest, it even tips the wink with the line "Got a venus, not in furs, but in uniforms, if you're not dancing then you're dead." Rightly so, as the track's enough to get the staunchest hater on the dancefloor at Trash.

At 17 tracks long (bonus track 'Baboon Rape Party' and mainstream-appeasing tack on 'Tainted Love' make up the numbers), the album is a serious listening concern. Self-editing has never been the band's strong point, and it's more evident here. With just a few snips (the single and the circus nightmare of a title track especially), this could've been the perfect antidote to the mass influx of pretty boys drowning the charts right now. As Marilyn Manson puts it so succinctly himself, "I'm the better of two evils."