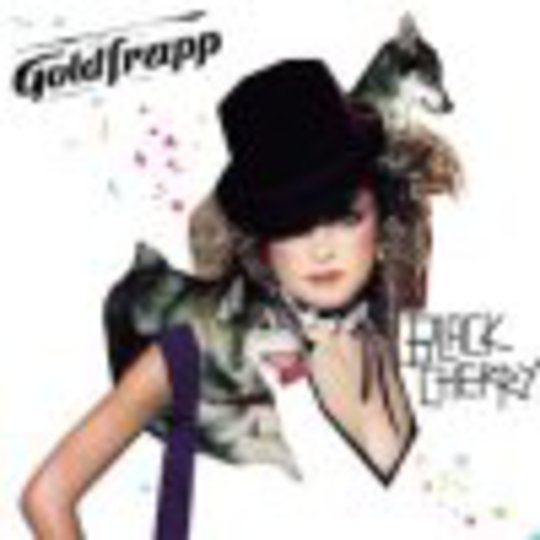 2000's 'Felt Mountain' established Goldfrapp as one of the most uncategorisable and intriguing collectives around, a soaring and ethereal collection of songs that showcased Alison Goldfrapp's remarkable and schizophrenic opera diva/throaty Nina Simone-esque vocals. But its success in part did come from the novelty of its eccentricity; it wasn't interesting enough as a complete record to send Goldfrapp rocketing skyward, and the worry was that album #2 would fail to capitalise on the initial leap they made. Au contraire; 'Black Cherry' reaches for the stars. It's the musical equivalent of Barbarella - pneumatic, space-age and confident in straddling the fairy-lit line between big-haired glamour and self-parodying disco camp.

Inspiration is saucily swiped from diverse quarters; the melancholic, not-entirely-human appeal of Goldfrapp's opera/jazz/ambient debut leaves a tangible residue that lasts throughout their second opus, but 'Black Cherry' takes a decidedly sexier, more rhythmic direction. It's one part classic Goldfrapp, one part gyrating, erotic, disco-sensible Kylie, and two parts retro, night-euphoric Donna Summer. They've also chucked in a heady dose of the sound à la mode, electroclash, particularly on the first single from the album, 'Train', with trademark seedy basslines and a generous lashing of Depeche Mode-inspired synthesised nihilist-pop. 'Inspiration'/plagiarism is generally the order of the day, most notably with 'Strict Machine' presenting a wholesale, unabashed rip-off of Donna Summer's 'I Feel Love' - tune, vocals 'n' all.

You could suggest the whole record is a cynical attempt on Goldfrapp's part to fare-dodge their way onto the 3am depths of the electroclash subway train. It's a reasonable and not quite inaccurate assessment; combine the frequent sonic plagiarism with the convenient about-face in direction, and Alison & co's motives look decidedly modish and financial. And at times the record does lack genuine feeling; its biggest failing is the fact that it is utterly throwaway. But its crystalline, neon-edged beauty, its pulsing army of beats and Alison's lush, lethargically versatile vocals, swinging between sultry and seraphic throughout, make it - for now at least - a largely satisfying record that indicates imminent and deserved success for Goldfrapp.