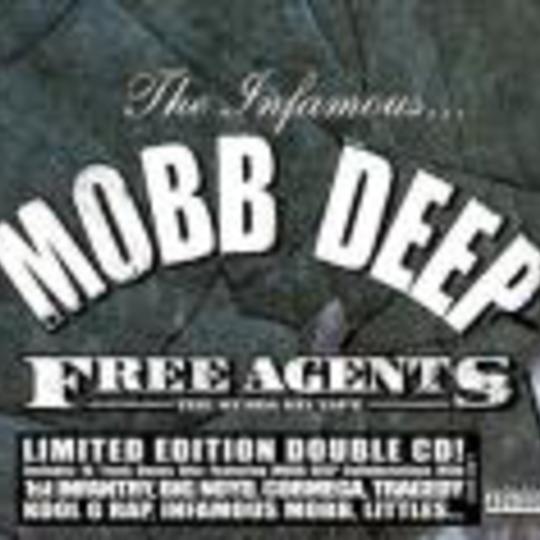 This Double CD was originally planned as a stopgap street mixtape to draw some attention to Mobb Deep while they negotiated a new record deal after Loud records folded. Hip-Hop can be a fickle genre to play in.

And Mobb Deep were right to have been worried, they never really recovered from taking the brunt of Jay-Z’s fury on his ‘Takeover’ track diss and the aftermath of 2001’s mostly rubbish 'Infamy' LP. For a band that prided themselves on being as street and unfuckwithable as you can get, the silence left fans wondering whether they had ever walked the walk at all.

Disc 1 is a bit hit and miss consisting of updates/slightly tweaked mixes of classic Mobb joints like ‘Survival Of The Fittest’ and ’Shook Ones Part II’ and some new tracks. It should’ve kicked off with a proper Fuck You, an ‘Ether’ or a ‘Hit ‘Em Up’ statement of intent to reclaim their place. Lead track ‘Solidified’ is a pretty good tune for an introduction, but the blows don’t connect. They needed to get fucking nasty here.

With tracks like ‘Double Shots’, ‘What Can I Do’ and ‘Favourite Rapper’ they mistakenly rely on some really weak party production. It’s just too lightweight and sounds so out of place, obvious pleasant enough grooves, but just not Mobb Deep.

They do land a few good solid blows when they do what they do best; dark, gothic soundscapes over heavy stagnant beats with grimy, revenge filled rhymes. ‘Let’s Pop’ and ‘Don’t Call’ could’ve been lifted from Raekwon’s ‘Only Built for Cuban Linx’ with its hardly-there and hardly-hip-hop weird production style, while ‘Paid in Full’ (subdued drums, cracked strings and a looped eastern vocal line) and ‘Tough Love’ have a vintage Mobb Deep sound. Anyone else hear Nas and Jay-Z disses on ’Cradle to the Grave’?

The second disc acts as a kind of introduction to the extended Mobb Deep family including Noyd, Twin and Infamous Mobb. On the whole these newcomers can’t flow like Prodigy or even Havoc, but seem to have picked better tracks with which to showcase their skills. The only pop pap here is that backing the main boys contributions. The strongest tracks on this whole collection are Noyds’ ‘Bang Bang’, with it’s jerkily upbeat melody built around a soul loop-hook reminiscent of Roc-a-fella production style (look out for his LP in the Autumn) and _‘4th July’ with an Alchemist production which is sure to be recycled for freestyles as soon as word gets out about it.

Not the kick-in-the-door comeback they needed, but as a taster for later this year it has glimpses of the old Mobb magic and flashes of brilliance from the new affiliates.