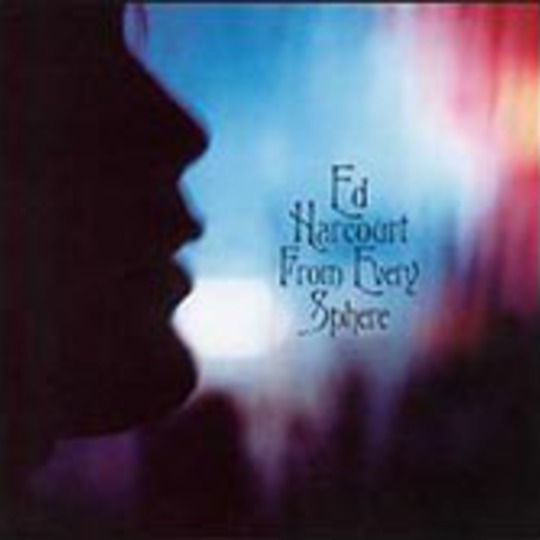 He's an odd creature is Ed Harcourt. Seven years ago he was playing bass for indie quirksters Snug and now he re-emerges as a 'serious' songwriter with a Mercury Prize nomination under his belt. But can From Every Sphere live up to the acclaim of his debut?

LIke Here Be Monsters, Harcourt's new offering is a grower. It can be split into two halves - the first comprising of piano-heavy ballads ('Watching the Sun Come Up', 'Bittersweetheart'), and the second half of more experimental efforts. The album highlights do tend to be when Ed veers away from the more orthodox instrumentation and branches out a little. 'Ghostwriter' is a dark, chaotic mix of drum machines, vocal effects and crazy noises, and 'Undertaker' is a paranoid jazz number inspired by the Grim Reaper.

Similar to Damon Albarn, Harcourt creates endearing eccentric personalities through character-based songs. 'Sister Renee' is the charming story of a terminally-ill man who falls in love with his nurse. However, at other points some of his lyrics leave a little to be desired: "When you get mad at me your eyes light up your face" ('Metaphorically Yours'), is a shocking age old clichee and "The birds will sing for us, we all die in the end" ('The BIrds Will SIng For You') sounds like it could be lifted from a Staind fan's poetry book, it's that depressing.

Musically, comparisons range widely, from U2 ('Watching the Sun Come Up') to Olivia Newton John - 'The Birds Will SIng For You' sounds shockingly like 'Hopelessly Devoted to You'!

Casting that aside, From Every Sphere is an album with a lot of class.The way Harcourt has arranged and instrumentated the album shows a mature songwriter with great talent for his tender age. Unfortunately, the piano/harmonica/trumpet combination is done to death. From Every Sphere is worth a listen though, for the more off-the-wall moments, an avenue which we can hope Harcourt will explore further.